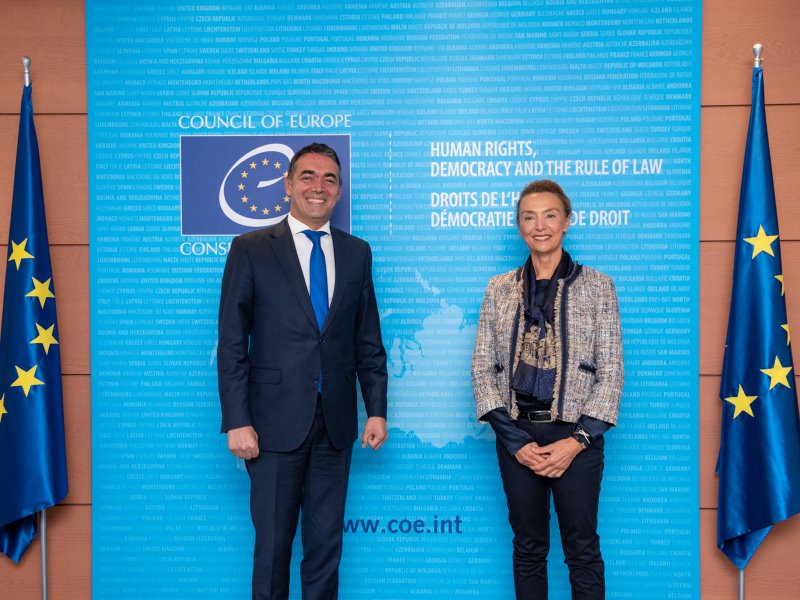 As part of his working visit to Strasbourg, Deputy Prime Minister Dimitrov held separate meetings with Marija Pejchinovikj Burikj, Secretary General of the Council of Europe, and Rick Daems, President of the Parliamentary Assembly, at which he presented the efforts of North Macedonia in the reform process in terms of democracy, human rights and the rule of law, as well as in the context of the regional cooperation and the process of accession to the European Union.

At the meeting with Secretary General Burikj, Deputy Prime Minister Dimitrov stressed that the efforts for integration of North Macedonia and the region in the European Union are aimed at achieving the goals of the Council of Europe and strengthening the European identity.

Dimitrov: "The Council of Europe is a credo for democracy, the rule of law and protection of human rights and this in itself is the essence of the accession negotiations - approaching the European standards as guidelines for building the future, cooperation and prosperity. Insisting on historical, linguistic and identity issues that currently constitute an obstacle on the path of North Macedonia to the European Union is contrary to the European identity and values ​​that we have agreed to promote and advance as a European society and community of nations."

Secretary General Burikj emphasized the country's progress and contribution to ensuring peace and stability in Europe, noting that the mechanisms of the Council of Europe support the integration of North Macedonia and the region as a common goal.

The current issues in the European integration process were also highlighted at the meeting with the President of the Parliamentary Assembly of the Council of Europe, Rick Daems, with whom Dimitrov discussed the modalities of strengthening and supporting the process.

Today, the Parliamentary Assembly of the Council of Europe initiated the adoption of a resolution on supporting the European future of the Western Balkans, which will be reviewed following the submission of a report by Georgios Papandreou.

Dimitrov: "We have invested a lot of time and energy in starting the accession negotiations with the European Union, and the obstacles we face make the European narrative more difficult and weaken our hope. Raising this issue by the Council of Europe comes at the right time and affirms the importance of this issue for the future of Europe, which is neither incomplete, nor even possible without the inclusion of the region as its integral part."

President Daems expressed his political support for overcoming the challenges and his openness for cooperation aimed at completing the European perspective of the region.

Deputy Prime Minister Dimitrov's participation in the Autumn Session of the PACE was rounded off with a discussion on the democratic challenges and the European aspirations for the Western Balkans, as well as the role of the Council of Europe in that regard, with attention paid to the prominent issues.