Dimitrov from Strasbourg: “The right to self-determination is inviolable – in a democracy, not even your own country can tell you how to feel, let alone another state or organization” 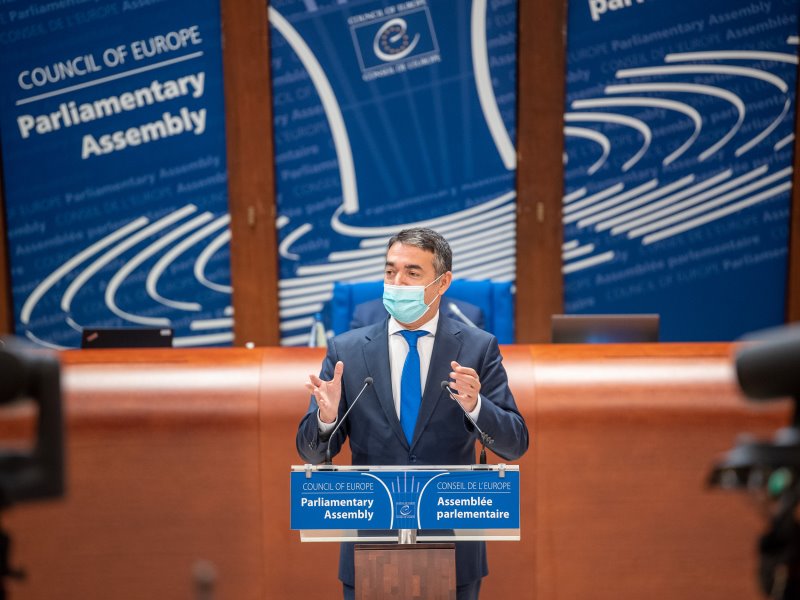 In his address to the Parliamentary Assembly of the Council of Europe, Deputy Prime Minister Nikola Dimitrov began his speech with 16 seconds of silence for the 16 years spent as an EU membership candidate-country.

"I did not just lose my train of thought - merely 16 seconds passed and it seemed long; so, you can see how long the 16 years look in the eyes of my country, which has been a candidate for membership since 2005”.

North Macedonia has demonstrated its commitment to achieving fundamental changes aimed at instituting European governance at home, as well as maturity and determination of a true European partner, who understands the different positions and turns them into acceptable solutions, because we share this vision of European unification.

The obstacles imposed by Sofia on the road to the EU are not territorial or reform-related, but historical and linguistic and directly interfere not only with our identity, but with what is the soul of Europe and the European identity, resulting in real implications in terms of the stability, security and prosperity of the region and the continent.

In Europe of the 21st century, the issue of my mother tongue must not collide with the country's progress towards membership. Not if Europe is a continent where cultural and linguistic diversity is respected, as stated in the Lisbon Treaty.

“Who I am and what language I speak are not issues anyone else may be allowed to have a say in. That is my personal issue. In a democracy, not even your country can tell you how you feel, let alone another state or organization", Dimitrov said.

The Deputy Prime Minister emphasized that every compromise comes at a political price that is paid at home, but that the guiding thought of real leaders is not the next elections, but the future generations. That is why, Dimitrov underlined, the compromises made by North Macedonia mean taking its right place in history; however, trampling on the right to self-determination can in no case be part of a compromise, because it is contrary to the European idea:

“This is why I appeal to responsibility and leadership in Europe.

The Western Balkans are an integral part of Europe; without a European perspective, it is like a room in the house that is cut off from the household and therefore the EU accession is a task of the region - just as much as it is a task of the EU - and implies mutual responsibility. Europe's failure to deliver on its promises to the region undermines the Union's credibility, thus striking at progressive forces, empowering nationalists and eroding the public confidence. Europe may not afford to lose the region, as the only sustainable vision for the future of these countries is the European one.

The wars of the 1990s in the Balkans are a civilization defeat of our continent. We live in a time when the foundations of the world order are shaky and unpredictable, and the region is a place of clash of different geopolitical forces. Europe needs to consider whether investing in the integration of the Western Balkans is more costly than the price of leaving out the region," Dimitrov said.

Dimitrov's address aroused great interest among the members of the Parliamentary Assembly of the Council of Europe, who posed a number of questions regarding the possible modalities for overcoming the challenges and completing the European perspective of the region.

Answers to the Assembly members' questions

The speakers conveyed messages of full support for Macedonia's integration into Europe:

"I urge Bulgaria to end the blockade. The damage is enormous", Lithuanian MP Laima Andrikienė said.

Asked by the Bulgarian MP Ekaterina Zaharieva about the measures taken by North Macedonia to deal with cases of discrimination and hate speech against citizens who declare themselves as Bulgarians, Dimitrov answered again:

"We do not have a single reported case of discrimination based on Bulgarian nationality. Not a single formal complaint. Hence, it is difficult for me to understand whether such accusations are part of your domestic political battle or the result of some kind of bubble in which you are and you really believe that some kind of discrimination is taking place. North Macedonia is a multiethnic country and, unlike in other countries in the region, our minorities are absolutely recognized and enjoy a guaranteed right to equality and self-determination.

As for the hate speech, I responsibly assure you that there are no such cases that involve state officials. Of course, we condemn hate speech incidents, but you should keep in mind that when you try to challenge the language and the right of self-determination of a people, it is expected that there will be a revolt. Your policy is an investment in antagonism, not friendship."

Dimitrov called on Bulgaria to join the recent initiative of the Council of Europe - History Observatory, where Bulgaria does not participate so far:

"This is an opportunity to work together and build a productive atmosphere, to learn from the comparative European experiences in overcoming issues related to the historical narrative" – ​​Dimitrov concluded.