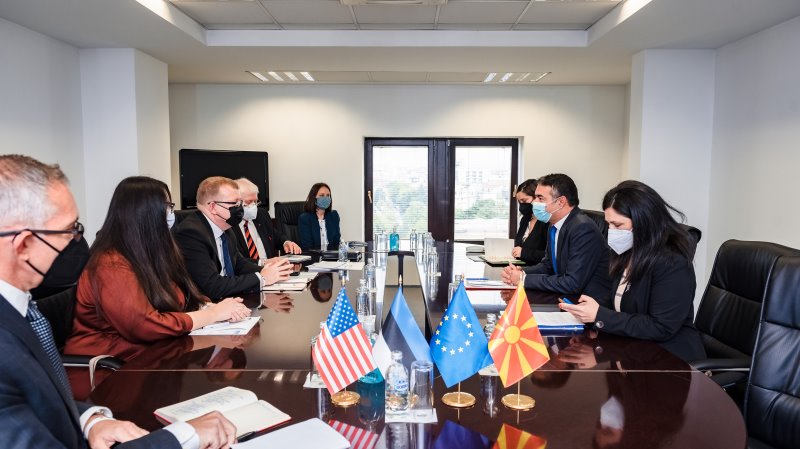 Deputy Prime Minister in charge of European Affairs Nikola Dimitrov met today with the Estonian Centre for International Development’s team and US Embassy representatives in the country, which officially marked the beginning of the project aimed at promoting North Macedonia digitization, implemented with financial support from Estonia and the United States.

The goals of the project were reaffirmed and activities to be implemented in the coming period were specified at the meeting, where Deputy Prime Minister Dimitrov emphasized the importance of the digitization process in the context of the EU integration process and expressed gratitude for the partnership and support that promote the principle of good governance.

Dimitrov: “Digitization is an important aspect of the Europeanization process because it will improve the quality and efficiency of service delivery to citizens, it will ensure the continuity and smooth operation of institutions, and is also a successful tool in the fight against corruption. Transferring the Estonian experience in cooperation with a strategic partner such as the United States is a great opportunity to create a successful digital story in North Macedonia.”

This project is the first trilateral cooperation between North Macedonia, Estonia and the United States of America, aimed at supporting the process of approximation to European standards and progress in the EU integration.

During the visit, the representatives of the Estonian Center for International Development will meet with a number of institutions, international donors, and both private and civil sector representatives who are active stakeholders in this area. The purpose of these meetings is to map the situation regarding the digitization of processes and services, as a starting point for further implementation of the project, while on Friday, 24 September, a press conference will be held to present this project’s goals and activities.