Meeting of the Deputy Prime Minister Besimi with the Director General for European Cooperation of the Ministry of Foreign Affairs of Netherlands, Robert de Groot 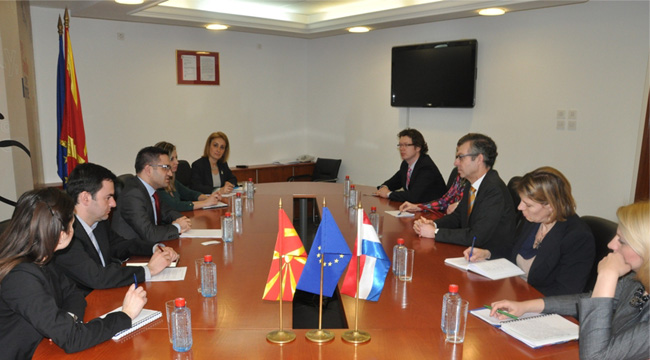 Today, the Deputy Prime Minister of the Government in charge of European Affairs, Dr. Fatmir Besimi, met the Director General for European Cooperation in the Ministry of Foreign Affairs of the Kingdom of the Netherlands, who is on a working visit to the Republic of Macedonia as part of his regional visits of aspiring countries for EU membership!

During the meeting, the interlocutors discussed about the efforts of the Government in the next period aimed at achieving concrete results in priority areas agreed in the framework of High Level Accession Dialogue (HLAD) or receiving a positive Spring Report by the European Commission, as well as the development of successful 4th HLAD meeting.

In this context, the Deputy Prime Minister Besimi emphasised his willingness to further extension of the High Level Accession Dialogue and any other projects that support the country"s EU integration process, as well as his personal commitment to the integration process, convinced that Euro-Atlantic integration are the best alternatives for the future of the Republic of Macedonia.

Besides this, the Government has a strong political will to continue the concrete results across the range of areas covered by the Copenhagen criteria, defined by the National Programme for Approximation of Legislation (NPAA) whose revision for 2013 was adopted by the Government of the Republic of Macedonia at the end of December 2013.

The Deputy Prime Minister of the Government, Dr. Besimi, emphasised that in this moment the country is at a crucial stage on the road to its strategic objectives, and that the support of the Kingdom of Norway in this process, especially in support of the High Level Accession Dialogue, is of great importance for the Republic of Macedonia.

At the meeting, the Deputy Prime Minister Besimi emphasised the importance of the support that the Kingdom of Norway provides to the Secretariat for European Affairs. In this regard, the Deputy Prime Minister Besimi announced coordination meetings between the Embassy and the Secretariat for European Affairs for assessing the progress in the implementation of programmes and for discussing the future activities and projects.

Dimitrov: “Regardless of who we are and what we believe in or what we stand for, climate change affects us all and we all have an equal obligation to it” – the start of the European Green Deal campaign
Deputy Prime Minister Dimitrov on
Dimitrov on the issue with Bulgaria: “You cannot create an anti-European criteria and present it as a condition for entry in the EU”
Dimitrov in Madrid: “It is clear that member states have influence in the accession process and can impose their national interests, but does that mean that they can set requirements that are contrary to the EU values?”