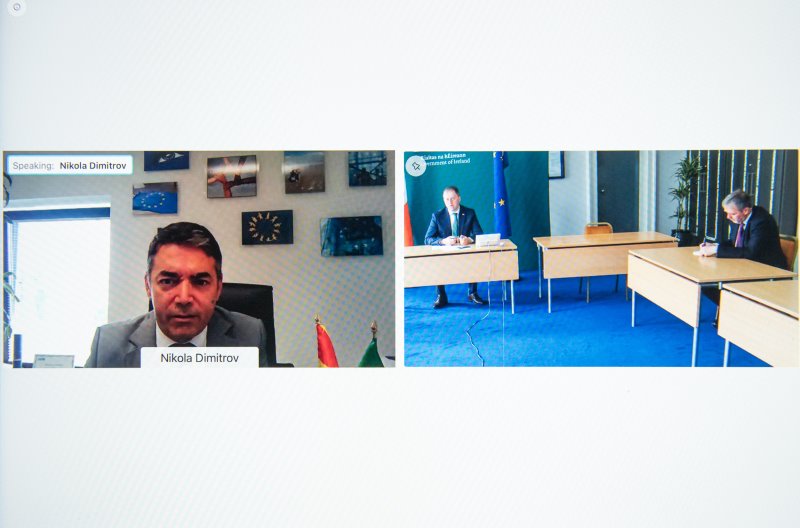 The Irish representative of the EU General Affairs Council expressed interest in North Macedonia’s EU candidate status, emphasizing the efforts of the Portuguese Presidency and their proposal, as a good basis for overcoming the challenges of adopting the negotiating framework and breaking through the EU integration path ahead of the June EU Summit. Deputy Prime Minister Dimitrov thanked for the continued Irish support in Macedonia's EU integration path and referred to the commitment to the European agenda in key reform areas, which requires an immediate start of accession negotiations, as well as the commitment to eliminate obstacles in that regard.

Dimitrov: "Although geographically distant, Ireland and North Macedonia are comparable in terms of many characteristics, and especially in their determination to act as constructive partners in EU. This connection inevitably points to integration and unity in values, which we strive to complete with a common European future under the flag of the European Union. I would like to thank Dublin for its resolute advocacy of European principles and its commitment to focusing on the essence of the accession process, which is the adoption of European legislation, values ​​and standards. For our part, we remain committed to the European agenda, as an additional argument to the support of our Irish friends for the process of enlargement, the further delay of which is unacceptable because it is detrimental to the common interests. I believe that a strong commitment along with goodwill and awareness of the stakes can result in a European solution."

Minister Byrne stressed that given the fulfillment of all conditions by North Macedonia and the huge investment in EU influence, Ireland is in favor of holding the first intergovernmental conference as soon as possible and the well-deserved start of EU membership negotiations. He announced strong support for North Macedonia at all upcoming meetings of the working bodies of the EU Council.

The interlocutors agreed that the opening of accession negotiations is an opportunity to deepen cooperation between the two countries, by transferring the fruitful Irish experience in the transformation process, which is currently taking place through strong technical and expert support within the Instrument for Pre-Accession Assistance (IPA).

Deputy Prime Minister Holds Telephone Talks with Counselor of the U.S. Department of State and senior policy advisor to the Secretary of State, Blinken