Besimi – Lazzarato: Announced the extension of cooperation with Switzerland in new sectors and new projects 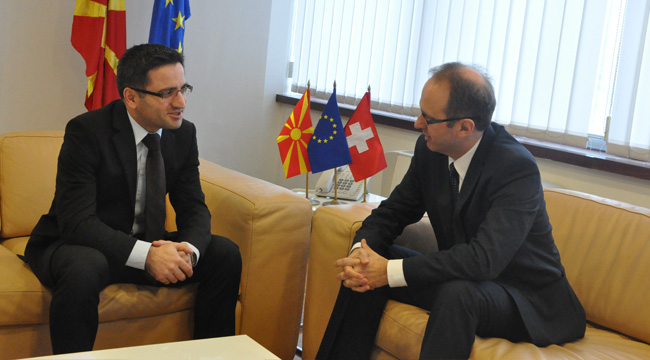 At this first meeting of Besimi as a Deputy Prime Minister of the Government with the Ambassador Lazzarato, they discussed about the continued cooperation, as well as strengthening the cooperation between the two countries, whereby a special focus was put on continuing the development of the country and the society of the Republic of Macedonia.

At the meeting, the Ambassador Stefano Lazzarato announced further extension of the cooperation in the Republic of Macedonia in new sectors, including new projects in order to support the economic development, such as reducing the unemployment and increasing the competitiveness, supporting the democracy with an emphasis on strengthening the capacities of local self-government and non-governmental sector, healthcare and the like.

In the end, the Deputy Prime Minister Besimi expressed his gratitude for the complements of the Ambassador Lazzarato on his new position, as well as for Switzerland's cooperation and support for the Republic of Macedonia, and assured the Ambassador that he will personally be dedicated and committed to continue and strengthen this cooperation.