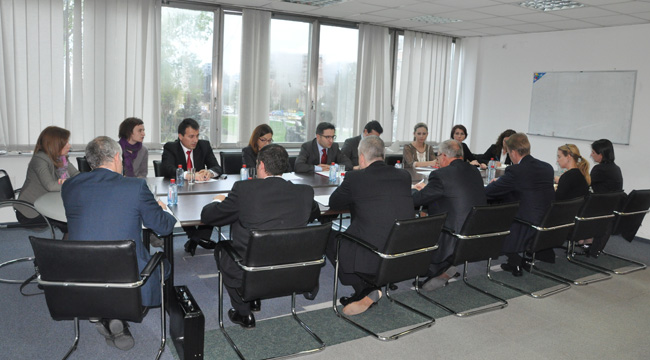 The Deputy Prime Minister for European Affairs, Dr. Fatmir Besimi and the members of the Steering Committee on Electoral Reform held the fourth meeting of the Committee. The goal of the meeting was to review the preliminary findings and conclusions of OSCE/ODIHR regarding the local elections-2013 as well as to establish the activities in the following period in line with the High Level Accession Dialogue- HLAD).

At the meeting, the past activities of the two work groups formed within the framework of the Steering Committee were presented regarding the amendments of the electoral legislation and the review of the Voters’ List.

It was agreed that the two working groups established after the first meeting of the Steering Committee within the framework of the Ministry of Justice for the purposes of amending the electoral legislation and within the framework of the State Election Commission for the purposes of the Voters’ List would continue their work. The Working Groups will address the recommendations of the OSCE/ODIHR Final Report including the ones that will be issued after the local elections 2013, with the aim of further reinforcement of the electoral reform through a transparent and inclusive consultation process.

The Steering Committee on Electoral Reform was established in February 2012 in order to address the recommendations of the Final OSCE/ODIHR Report for the early parliamentary elections in 2011 in order to improve the electoral process, and it is comprised of representatives of relevant state institutions, NGOs and international community. The Steering Committee will meet regularly in the future in order to monitor the activities that will be undertaken by Working Groups to promote electoral reform.