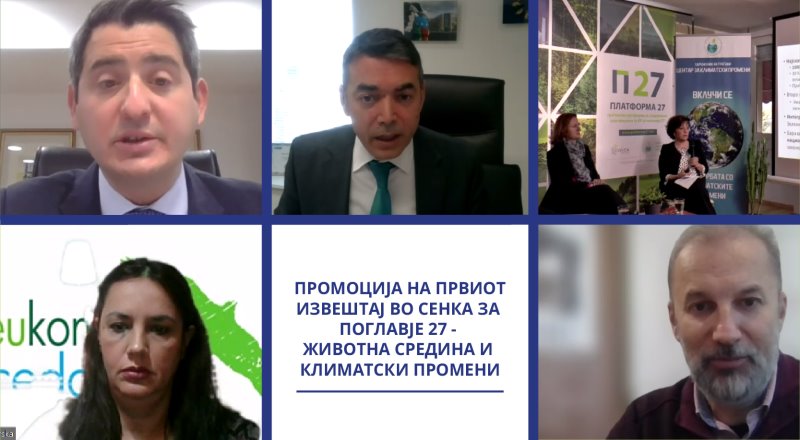 Nikola Dimitrov, the Deputy Prime Minister in charge of European Affairs spoke today at the presentation of the first Shadow Report on the harmonisation and implementation of the legislation pertaining to Chapter 27 – Environment and Climate Change, prepared by Platform 27 as an informal network of civil organisations that operate in this field.

Deputy Prime Minister Dimitrov emphasised the role of civil society organisations in the policy-making process, highlighting that approximation to European standards from Chapter 27 requires a wide social commitment to economic and social transformation with a main focus on improving the environment.

Dimitrov: “In our domestic reform agenda – “Europe at Home”, the environment has been prioritised as an imperative, a key area on the level of the first cluster “Fundamentals”. Considering our long-standing implementation of the Stabilisation and Association Agreement, North Macedonia is a good position in terms of Chapter 27; however, it is necessary to have that additional incentive to accelerate and expand the reform, which will undoubtedly help and start negotiations. In addition to harmonisation with EU legislation, a very important segment is the actual implementation of adopted policies, and the next phase includes the use of the “the best green technologies” and creating “green jobs”. The Green Agenda for the Western Balkans is one of the key instruments in that domain and its implementation is supported by the EU through the Economic and Investment Plan, and at the same time it strengthens our responsibility in the process which in turn demands building a wider social consensus.”

Mr. Naser Nuredini, the Minister for Environment and Physical Planning also spoke at the event, stating that the findings from the Shadow Report will be carefully considered when the policies in this field are created which in turn will strengthen the partnership with civil organisations.