Dimitrov: “Regardless of who we are and what we believe in or what we stand for, climate change affects us all and we all have an equal obligation to it” – the start of the European Green Deal campaign 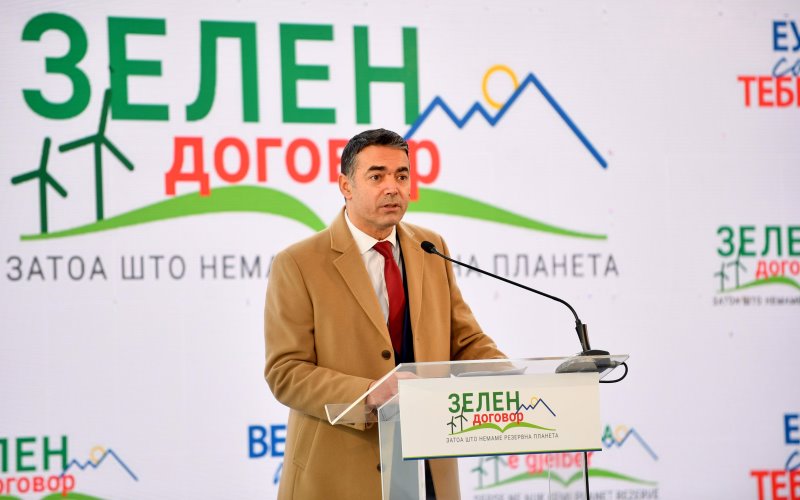 The Deputy Prime Minister in charge of European Affairs Mr. Nikola Dimitrov and the Head of the Delegation of the European Union to North Macedonia, Ambassador David Geer, in the presence of the Minister of Environment and Physical Planning and several mayors, promoted the new “EU For You” campaign focused on the European Green Deal.

The Deputy Prime Minister Dimitrov said that the joint efforts to tackle climate change is an expression of the strategic partnership between the EU and the Western Balkans, and the fact that the specificity of these occurrences is an additional argument towards the need to move forward with the accession process and move closer to European standards.

Dimitrov: “Climate change and its consequences don’t recognise borders or whether a country is a member state or a candidate state; however they do demand joint action and solidarity and confirm that Europeanisation is important and necessary - for the candidate countries and the European Union equally. The Green Deal is an expression of the ability of the EU as a global actor to take responsibility, lead and be a force that pushes towards positive changes. The Green Agenda for the Western Balkans can become reality through the consistent implementation of the Action Plan on national but also on local level, because this is one of those issues that demands our political maturity and for us to act together. The healthy environment, as an area and a basic human right in the “Agenda: Europe at home” has been elevated on the level of the first cluster “Fundamentals”, because these issues have a direct impact on our health and quality of life as citizens – regardless of who we are, what we believe in and what we stand for.”

Ambassador Geer said that the European Union can assist by providing experts, advice and significant funding within the framework of the instruments at its disposal: “Climate change cannot be defeated with separate initiatives – the European Union is prepared to do more, but more comprehensive policies are needed, with strong political commitment and relevant administrative capacities on national and local level, and by including the citizens and source initiatives.”

The campaign aims to raise awareness about the European Green Deal and its key objective – to reach net-zero greenhouse gas emissions by 2050, making Europe the first climate neutral continent, and North Macedonia is part of the Green Agenda for the Western Balkans, approved by the leaders of the Western Balkans countries at the Summit of the Berlin process that took place in Sofia in 2020.