Dimitrov in Madrid: “It is clear that member states have influence in the accession process and can impose their national interests, but does that mean that they can set requirements that are contrary to the EU values?” 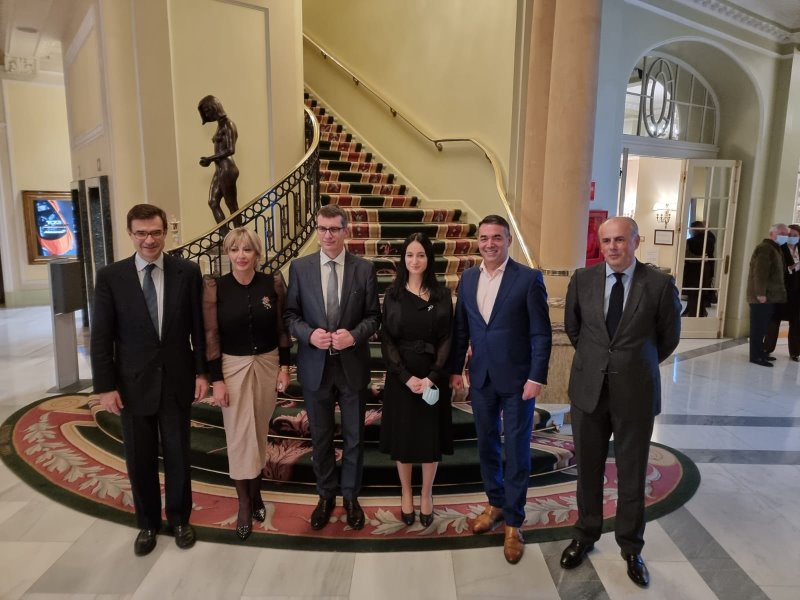 Deputy Prime Minister in charge of European Affairs Nikola Dimitrov today in Madrid was a speaker at the event Future EU Enlargement: Prospects and Pitfalls. The discussion focused on the benefits of enlargement both from the point of view of the region and the EU and its member states, as well as the importance of transformative power in the accession process, which is a prerequisite for impartial evaluation of membership criteria.

Deputy Prime Minister Dimitrov pointed out that the enlargement process was in fact a process of completing Europe and rounding off the project for securing a lasting peace and prosperity on the continent.

Dimitrov: “Through the EU enlargement with the countries of the region, the map of Europe will not expand, it will remain the same, symbolically speaking – only the current gray area will become blue and yellow. That is why we need to talk about completing the unification of Europe.”

Dimitrov said that the European integration process of North Macedonia is an issue that re-examines the internal cohesion of the EU and the values ​​on which it is based, as well as the EU influence in the region:

“Along our thorny path, we have perfected our patience, as the reason for postponing the start of accession negotiations was not the non-fulfillment of the Copenhagen criteria, but a bilateral dispute. We have invested huge political capital based on the EU’s promise, but when the promise is not fulfilled, trust becomes a problem and the EU loses its influence in this strategically important region. It is clear that member states have an influence in the accession process and are able to impose their national interests, but does this mean that they can also set requirements that are contrary to the EU values? The main pitfall in the accession process is to become hostage to bilateral issues. The best and only way for countries to grow together, to become wiser and more mature in political terms, is through the European project.”

The discussion was also attended by the Spanish representative to the EU General Affairs Council (GAC) Juan González-Barba, GAC Chairman Gašper Dovžan, Serbian Minister of European Integration Jadranka Joksimović, as well as senior representatives of foreign and European affairs from Albania and Montenegro. The Spanish representative Barba stressed that the opening of accession negotiations with North Macedonia was an urgent issue because the EU enlargement means strengthening both Europe and strategic autonomy. Slovenian representative Dovžan emphasized that the transformative power could really make a change and therefore, the biggest risk was the stagnation of this process, so the EU file of North Macedonia was a priority for the current presidency.

The visit to Madrid continues with a bilateral meeting of Deputy Prime Minister Dimitrov and the Spanish representative in today’s discussion and GAC representative, Juan González-Barba.