News
Deputy Prime Minister Ademi had a meeting with the ambassador of the Kingdom of Netherlands
13:35, Thursday, April 14, 2016 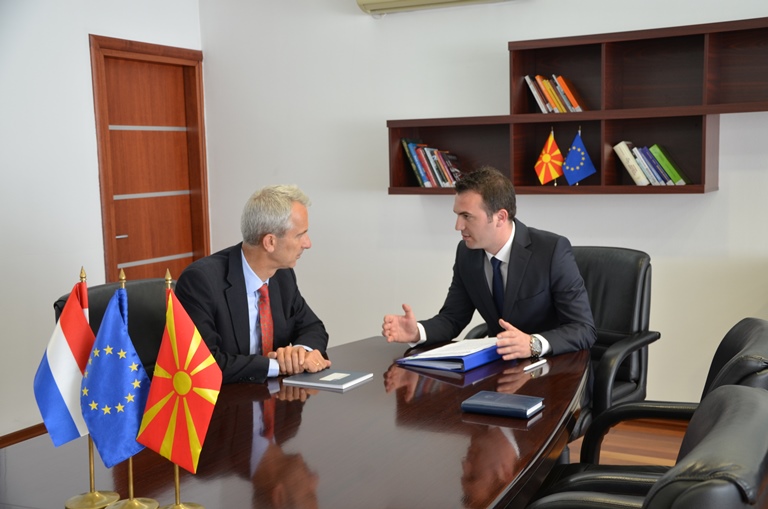 Deputy president of the Government of the Republic of Macedonia for European Affairs, Arbr Ademi PhD, today had a meeting with the Ambassador of the Kingdom of Netherlands, Mr. W. Wouter Plomp.

During the meeting, Deputy Prime Minister Ademi briefly informed about his participation at the informal ministerial meeting of the General Affairs Council in Amsterdam. Deputy Prime Minister Ademi and the Ambassador Plomp also addressed the current political developments in the country, especially in recent days, stressing the importance for the following period to take steps towards meeting the obligations of the political agreement and the provision of conditions for implementation of democratic and credible elections.

The interlocutors also discussed the implementation of the obligations arising from the Urgent Reform Priorities and agreed that it is necessary in the future to keep the focus on these activities which are crucial for the European perspective of the country.

Ademi and Plomp exchanged opinions on the challenges and actions for dealing with the migrant crisis thus took note of the situation and the recent incidents of theMacedonian-Greek border.

Deputy Prime Minister Ademi during the conversation stressed that the friendly cooperation between the two countries shall not only to continue, but also deepen. He also thanked for the consistent support of the Netherlands, including the time during the EU presidency, stressing that the migrants and refugees crisis shows how important it is for the Western Balkans to be integrated into the EU as soon as possible.