News
Deputy Prime Minister Besimi welcomed the Secretary General in the Ministry of Foreign Affairs of the Republic of Italy on a meeting
11:10, Wednesday, March 09, 2016 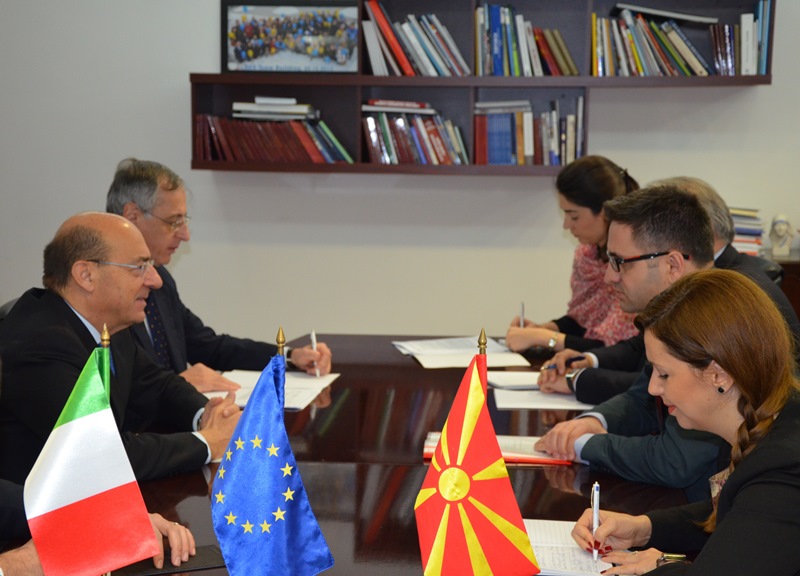 Deputy Prime Minister of the Government for European Affairs, Mr. Fatmir Besimi today, March 9th 2016, had a working meeting with the Secretary General in the Ministry of Foreign Affairs of the Republic of Italy, Mr. Michele Valensise.

The decisive distinguished bilateral relations between the both countries were stressed and the open and sincere support of Italy for our Euro-Atlantic aspirations was emphasised, Italy"s position that the process of EU enlargement will not be complete without connecting all countries Western Balkans was highlighted.

During the meeting the current political situation in the country was discussed, and the Deputy Prime Minister Besimi stressed the importance of using the upcoming period for fulfilment of all necessary preconditions to organise fair and democratic elections in accordance with the international standards.

Regarding the country"s commitments in the EU integration process, Besimi spoke about the implementation of the Urgent reform priorities which are particularly important given that after the elections, the country will receive another Report from the European Commission on the basis of which will be determined the future perspective of Macedonia

Regarding the migrant crisis, the interlocutors referred to the recent conclusions of the EU summit and Turkey, as well as the need of certain progress in the implementation of the agreed. They stressed the importance of harmonised and effective policy within all EU member states, especially stressing the principle of solidarity in dealing with the crisis, so that Macedonia shall continue to be constructive partner in the whole process.

In this regard, Deputy Prime Minister Besimi expressed gratitude for the financial assistance from the Republic of Italy in dealing with the migrant crisis and the support to prevent flooding through the IPA Regional Programme for Prevention, Preparedness and Response to the floods in the Western Balkans and Turkey.