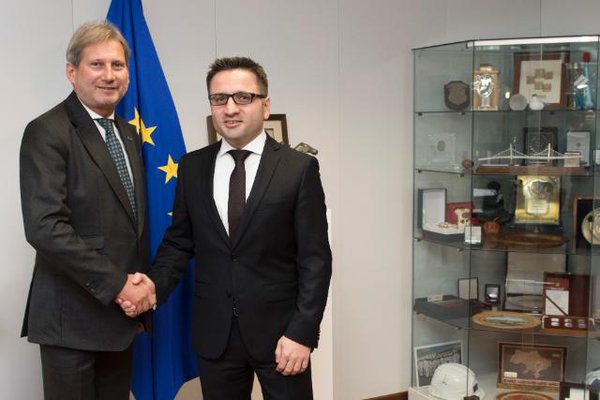 Brussels, 25 November 2015 (MIA) – For Macedonia it is crucial to stick to the recommendations noted by the European Commission in its latest progress report, EU Commissioner for European Neighborhood Policy and Enlargement Negotiations Johannes Hahn told Macedonian Deputy PM Fatmir Besimi in their joint meeting in Brussels on Wednesday.
Five topics were discussed during Besimi’s meeting with Hahn, MIA’s correspondent reports from the Belgian capital.

“The goal of today’s meeting was to brief Hahn on what kind of approach was taken by Macedonia immediately after the progress report and what has been done in the meantime. Recommendations stemming from the report, i.e. what is expected of Macedonia, were discussed. They are very clear requiring implementation of the political agreement, and the obligations arising from the document, through a constructive approach by all political parties, in particular regarding the functioning of the institutions, where there are representatives of several political parties,” Besimi told MIA.

The second aspect of the Besimi-Hahn talks covered the urgent reform priorities, expected to be fulfilled by Macedonia, which have been noted in the EC progress report for 2015. Both interlocutors also discussed the refugee crisis.

“In this regard, Macedonia is expected to demonstrate open approach and to strengthen its coordination with respect to the support to EU’s plan in the wake of the conclusions adopted at the latest Western Balkan conference in Brussels dedicated to the refugee crisis,” stated the Macedonian government official.

The fourth topic of today’s meeting in Brussels focused on the recommendations with respect to the Council of the EU ahead of a summit of the European Council in December, which are being prepared by the EU members, according to Besimi.

“We are considering what can be done in order the Council of the EU to make conclusions that would pave the way in the future for a breakthrough in the EU integration process of Macedonia,” the Deputy PM said.
The fifth topic, he added, covered the cooperation established now and leading to the April elections in Macedonia.

In an attempt to assess developments in Macedonia and its commitment to the already-mentioned topics discussed at the Besimi-Hahn meeting, the European Commission will send a team of experts in Macedonia to assist the country in producing the required results.