News
OSMANI: NORTH MACEDONIA IS A PROTECTOR OF THE EUROPEAN CREDIBILITY ON THE BALKANS
13:15, Friday, October 11, 2019 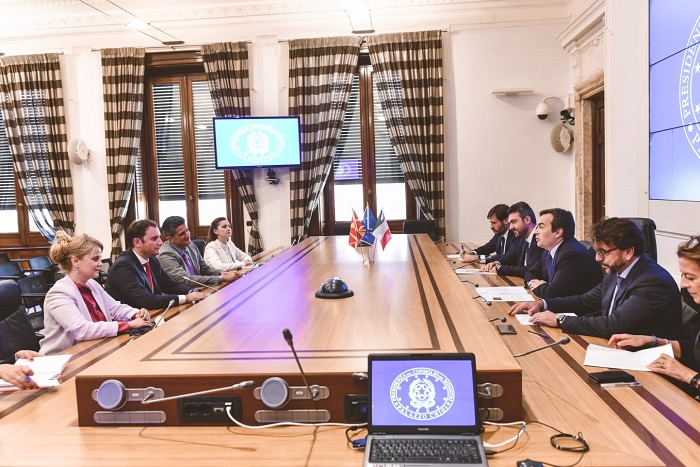 "The meeting of the EU Council next week is fundamental to us, as a country which has fulfilled all the preconditions and commitments, for which we deserved to expect the start of negotiations with the EU this year," Osmani said, noting that the start of accession negotiations with The Republic of North Macedonia with the EU this year will also be an encouragement for the whole region in the implementation of the European perspectives.

"And not just for us, but beyond, the upcoming EU summit is a kind of milestone through which will be paved the prospects of the negotiations, as one of Europe's most successful political projects in general. Without proper recognition for the progress of North Macedonia, not only will the EU's credibility in the region be worn out, but it will jeopardize further the enlargement process and lose the positive transformation power of the European perspective, "Osmani said.

During the meeting, Osmani expressed gratitude for Italy's support so far for the European integration of the Republic of North Macedonia and received firm assurances from Minister Amedola that Italy remains committed to the European integration of the entire Western Balkan region, with strong support for the start of the negotiations with the Republic of North Macedonia, ahead of the EU Summit next week.

During his working visit to Italy, Osmani also had a meeting with the President of the Committee on Relations with the Western Balkan countries in the Italian Senate, Luciano D`alfonso, where in addition to the topics of the European integration of the region and the country, the Senate's upcoming activities were also discussed, on ratification of the NATO protocol by Italy, while Osmani received assurance that Italy will fulfil this obligation in due time.

The visit to Italy is part of Deputy Prime Minister Osmani's European tour to visit European capitals ahead of next week October EU Council meeting.