News
Besimi on the round table on the subject "European perspective of the Western Balkans after the European Parliament elections"
15:08, Tuesday, June 03, 2014 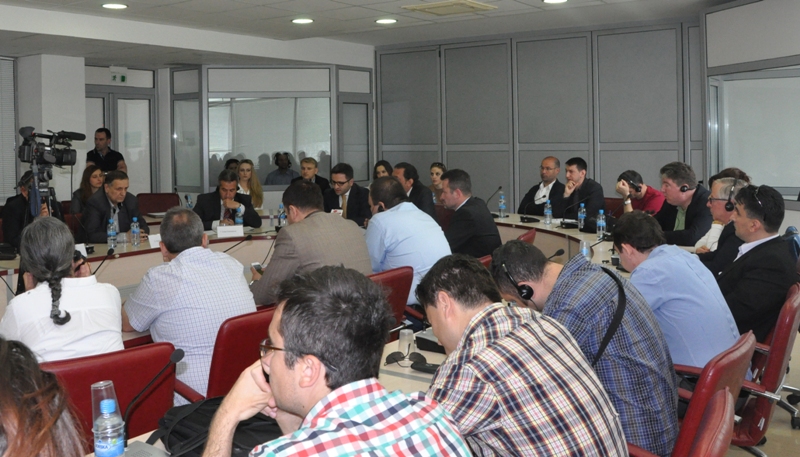 The Deputy Prime Minister of the Government of the Republic of Macedonia in charge of European Affairs Fatmir Besimi, PhD today (Tuesday, June 3, 2014) has participated in the round table "European perspective of the Western Balkans after the European Parliament elections" organised by the Secretariat for European Affairs and the South East European University in Tetovo.

The round table has been attended by an established members of Academy, professors and intellectuals from Macedonia in the field of European Integration, where they have had the opportunity to mutually discuss and analyse the results of the European Parliament elections and their impact on the views of the citizens and governments of the EU Member States.

The Deputy Prime Minister Besimi has opened the debate by quoting one of the founders of the European Union, Jean Monnet: "When you find yourself in a storm, the only way out is to stay true to your course. The only thing you don’t do is change direction.",which means that despite the challenges the EU Agenda remains a common objective of the region and the EU.

At the debate has been discussed that although the Eurosceptics, for the first time, have obtained more seats in the European Parliament compared to the previous elections, the majority of the seats still belong to the pro-European and neutral parties of Europe, which means a support of the EU enlargement.

"This mandate will mean a mandate of a “More cautious Europe" in terms of the EU enlargement, because the criticism will be more severe regarding meeting the criteria by the candidate countries for an EU membership", answered Besimi when asked if there would be now “more or less Europe” regarding its views for further enlargement.

Within the debate has been mainly emphasized that the European Parliament elections show the views and positions of the Europeans on the manner the EU operates, on the policies that have been adopted and implemented at European level, as well as on the manner of dealing the challenges by the European leaders, especially taking into consideration the effects of the economic crisis that has hit Europe in the past period.

"We expect that the EU enlargement be put on the Agenda of the next European Parliament. The European Integration remains the best alternative for the Western Balkans and we consider that it is an interest of EU, too. We continue with our commitments to our European future." – said the Deputy Prime Minister Besimi on the round table.

The Deputy Prime Minister Besimi on the round table has stressed once again the strategic goal of the Republic of Macedonia, which is implementing the reforms and integrating the country in the European Union and NATO. Furthermore, he has pointed out that for our region the European perspective remains further a generator of a positive democratic movements, economic growth and development.
"The EU idea, for the Republic of Macedonia and for the whole region, represents an idea that unites, which contributes to peace and stability in the Western Balkans." – with this statement the Deputy Prime Minister Besimi has closed the debate by showing an appreciation to the participants for their contribution to this round table.