News
OSMANI: THE SUCCESSFUL PARTNERSHIP BETWEEN THE UN AGENCIES AND THE GOVERNMENT LASTS FOR OVER 20 YEARS
15:44, Wednesday, July 17, 2019 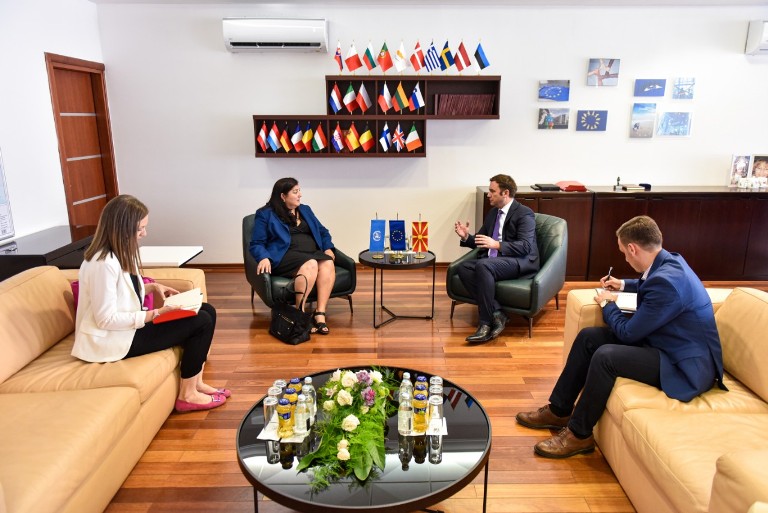 Deputy Prime Minister in charge of European Affairs, Bujar Osmani, had a meeting with the UN Resident Coordinator in North Macedonia, Rossana Dudziak.

At the meeting they discussed the future steps and ways for further strengthening of the strategic partnership between the Republic of North Macedonia and the United Nations, with a special emphasis on the achievement of the Sustainable Development Goals.

During the conversation, the Deputy Prime Minister Osmani expressed gratitude for the huge and continuous UN support to our country in the process of democratization of the state, as well as for the support in the more significant areas for citizens, especially in the area of environmental protection.

"The United Nations with its agencies in the Republic of North Macedonia is a partner of the Government in the dialogue on sectoral strategies and policies and active supporters in the sectoral coordination through projects that are being continuously implemented in the last 20 years," Osmani said. In this context he expressed his satisfaction with the work of the UNOPS office that was opened last year, certainly in the direction of implementation of the funds from the Kingdom of Norway and Sweden, which bilateral support is the basis for the implementation of UNOPS projects in the Republic of North Macedonia to support the European integration process..