News
OSMANI: THE SUPPORT FOR THE EUROPEAN PERSPECTIVES RECEIVES GROWING SUPPORT FROM THE CITIZENS
11:29, Tuesday, September 18, 2018 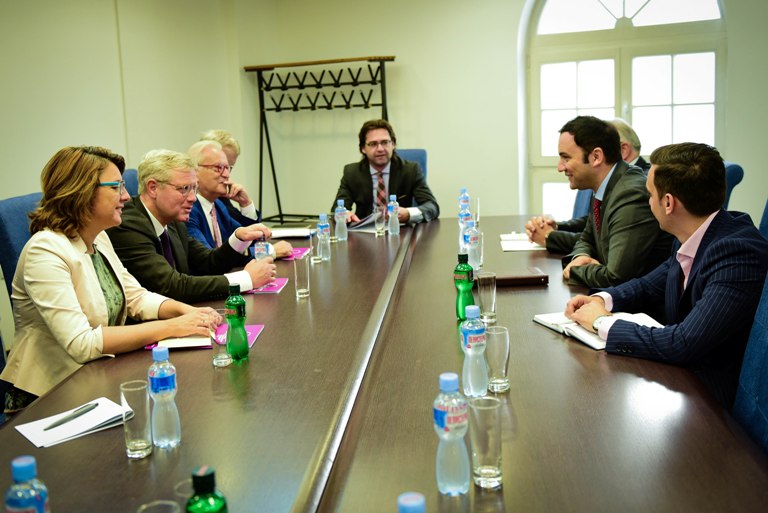 Deputy Prime Minister in charge of European Affairs, Bujar Osmani, today in the premises of the Government of the Republic of Macedonia, had a meeting with a delegation from the European Council on Foreign Relations led by Norbert Rothgen, Chairman of the Committee on Foreign Affairs of the Bundestag who pays a visit to our country.

Today's visit of the representatives from the European Council on Foreign Relations is aimed at supporting the European and Euro-Atlantic perspective of the Republic of Macedonia, especially in the direction of encouraging the country at these decisive moments, to join the European momentum in the region.

"It is a real honour for the presence of our international friends and well-intentioned whose support in this period is unambiguous and it is an important incentive and encouragement for the citizens in their decision to support the European perspective of the country," Osmani said. In that direction, Osmani informed about the activities of the Government, as well as the political parties on the upcoming referendum, and expressed hope and expectations for its success.

"Citizens have realised the seriousness of this decision, and with the coming day of the decision, the support for the Euro-Atlantic perspective of the country is growing," Osmani said, emphasising that he expects mature behaviour from all relevant political representatives in the country, who, he said, he expects that they will not miss this unprecedented chance to help their own country and their own citizens in fulfilling their aspiration for EU and NATO membership.

The European Council on Foreign Affairs is one of the most influential pan-European "think tank" organisations, whose main mission is the protection and promotion of European values, especially in the construction of the values of the wider Europe.