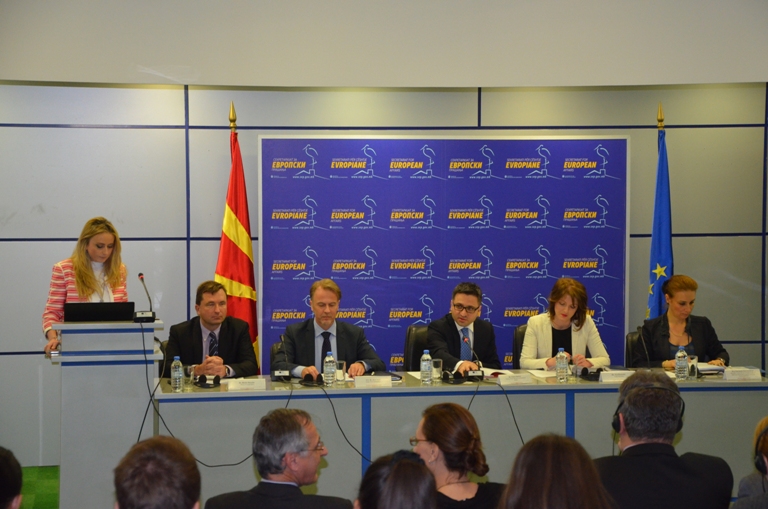 Deputy Prime Minister for European Affairs, Fatmir Besimi, PhD together with the Ambassador of the EU Delegation in Macedonia HE Aivo Orav, today February 17, 2016 held a press conference where they presented the status of implementation of the Instrument for Pre-Accession Assistance IPA.

In his opening remarks, Deputy Prime Minister Besimi stressed that in the previous period IPA 2007-2013 and IPA 2014-2020 were operated simultaneously. Particular attention was paid to the implementation of the current IPA and the programming of IPA 2 based on positive experiences and lessons learned. Special emphasis was put on transparency and inclusiveness in the implementation of IPA are in order to bring closer IPA projects to the citizens.

Regarding IPA 1, Deputy Prime Minister Besimi underlined that a total of 614 million Euro are allocated to the Multi Financial Framework 2007-2013 by the end of 2015 a total of signed contracts in the amount of 379,793,907 Euro. The number of contracts implemented is around 957 through national institutions or the IPA structure. By the end of 2017 remain to conclude additional 97,114,015 Euro.

Comparing the level of utilization of IPA funds Besimi emphasised that it is a positive trend. Namely the percentage of utilisation in 2015 was 61.8%, in 2013 34.2% and in 2014 45.8%. This trend is due to the accumulated experience in the IPA structures at national level, where 360 people work professionally.
The State Secretary Ana Blazheska delivered an address on the programming of the IPA 2 where she emphasised that the available 664 million Euro according to the Country Strategy Paper for the Republic of Macedonia is programmed in eight sectors The seven- year programming documents in the sectors of transport, environment and IPARD 2, annual programs for 2014 and 2015 have been programmed so far. The Annual Programme for 2016 in its final stage of programming while the Programme for 2017 is in an initial phase.

The Ambassador Orav in his speech welcomed the established practice of regular and transparent informing the public about the EU funds related to the degree of implementation and their planning. The European Union welcomes the efforts and challenges identified in the implementation, stressing the need to strengthen and maintain the national IPA structures in the long term.