News
Working visit to Brussels by the State Secretary of the Secretariat for European Affairs Blazheska
14:02, Wednesday, November 18, 2015 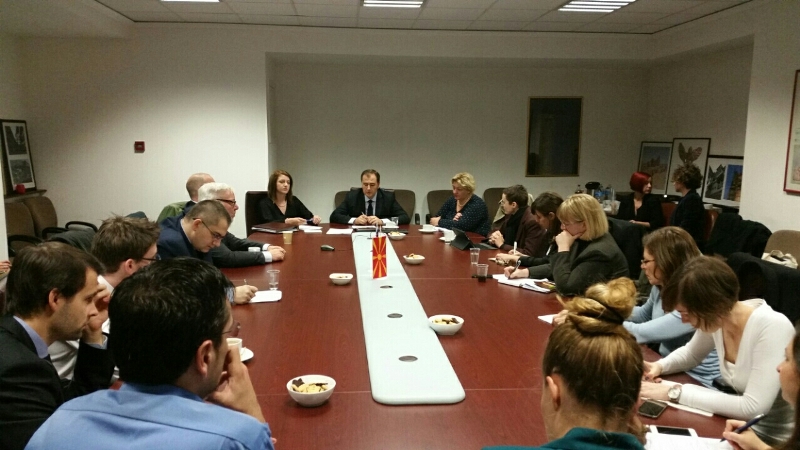 During the working visit to Brussels, the State Secretary Ana Blazheska held working meetings with K. Vent, Director at DG NEAR.

State Secretary Blazheska stressed the importance of the seventh consecutive recommendation for start of EU accession negotiations during the meeting. They discussed several activities implemented by the Government in order to improve and enhance the level of preparedness of the Republic of Macedonia for membership in the European Union. Also they discussed the use of IPA ,as well as the implementation of IPA notes from the audit report.

At the meetings, State Secretary Blazeska stressed that European integration remains a key strategic priority of our country. In this context, she pointed out that the Government monitors the implementation of the selected priorities based on the recommendations of the European Commission, which are key in the process of EU accession. She also emphasised that the open funds through IPA are great assistance to Macedonia and which are available for the Macedonian citizens and institutions in several different areas. A number of infrastructure projects that beneficial for the citizens have been implemented through these funds so far.

During the visit, she had a meeting with the Rector of the College of Europe, Dr. Jorg Monar at the headquarters of the College in Bruges. They discussed various possibilities for cooperation through scholarship opportunities for students from Macedonia.

Also, she had meetings with D. Kulen, head of unit for Macedonia at DG NEAR, M. Jung, head of unit for Western Balkans and regional cooperation at DG NEAR. The Progress Report and the EU Enlargement Strategy were also discussed at the meetings. At the meeting with M. Jung they discussed the various possibilities offered by the IPA regional programme, as well as various projects for infrastructure connection.

State Secretary Blazheska participated at the briefing held in the Macedonian Mission in Brussels with the members of COWEB (Working Group on the Western Balkans). The briefing, which was held together with the Ambassador of the Republic of Macedonia to the EU, Lepavtsov, they jointly presented Macedonia"s progress in fulfilling the political agreement and urgent reform priorities in front of the COWEB members.