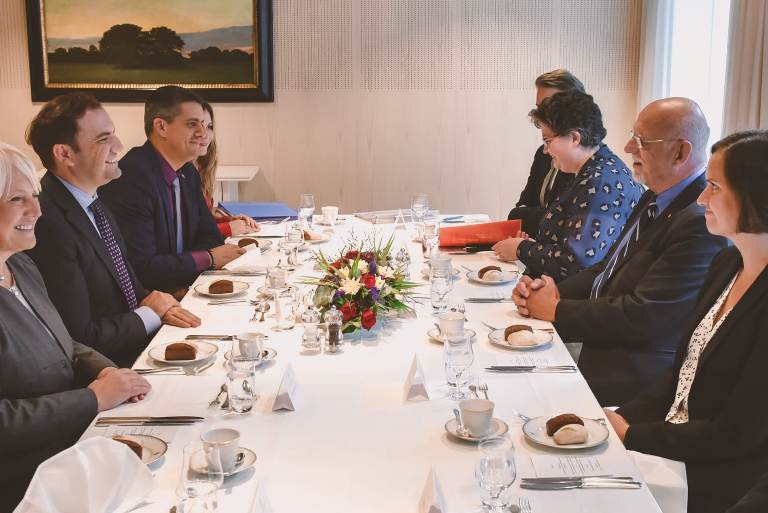 Deputy Prime Minister in charge of European Affairs, Bujar Osmani, within his working visit to the Kingdom of Sweden, had a meeting with the Minister for foreign affairs, Hans Dalgren.

"Sweden has not only always been seen as an important supporter and friend in achieving our strategic goals such as European integration, but also as a model country, a kind and an inspiration to undertake the appropriate reforms in the spirit of the European values." - Osmani stated, pointing out the support that the country expects from the Kingdom of Sweden in the forthcoming period, ahead of the great decision in October for start of the negotiations with the EU this year.

During the meeting, Deputy Prime Minister Osmani expressed gratitude that within the project "Nordic Progress" which is being implemented in the country, Norway and Sweden jointly support the most important process at the moment - the accession negotiations, i.e. supporting the whole process of integration of the Republic of North Macedonia in the EU.

At the meeting, Osmani also referred to the current developments in the country, related to the progress in key areas such as the rule of law, security service reforms, justice and the fight against organised crime and corruption.

During his working visit to Sweden, Osmani had earlier meetings with the Speaker of the Parliament Andreas Norlen, as well as with the Minister of International Development Cooperation, Peter Eriksson.

A visit to the Kingdom of Sweden is part of Osmani's tour of European capitals ahead of the European Council's October meeting, followed by a visit to Brussels, and afterwards visits  to Berlin, Warsaw, etc.