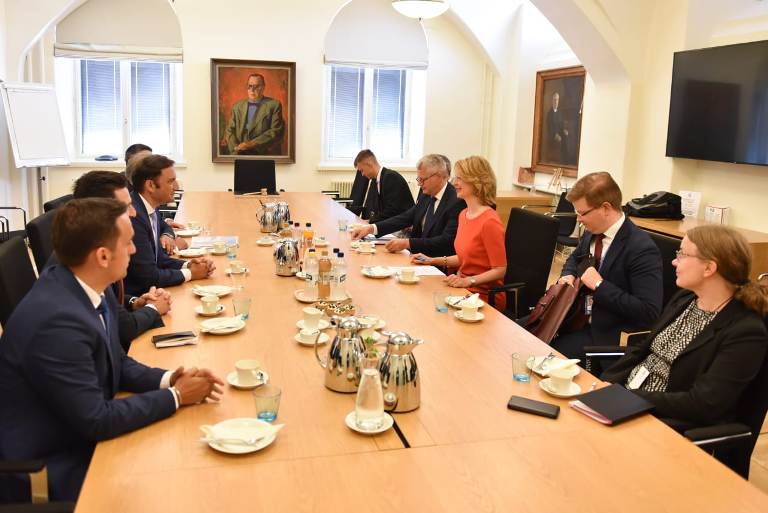 Deputy Prime Minister in charge of European Affairs Bujar Osmani, within his working visit to the Republic of Finland had separate meetings with Minister for European Affairs Tytti Tuppurainen and with the Minister of Foreign Affairs, Pekka Haavisto.

The main topics discussed at the meetings were the expectations and perspectives of Northe Macedonia in the forthcoming period, as well as the activities and support by the Republic of Finland under the Finnish Presidency of the European Union, in the context of the forthcoming decision to start negotiations in October this year.

"Finland is a stable and long-time supporter of the enlargement process, but at today"s meetings we have taken one step further - I have received strong assurance from the ministers of their active role in the forthcoming period, within their competence as Presidents of the European Union, to successfully finalize the European integration process of the country through a decision to start negotiations with the EU in October this year, "Osmani said, reaffirming the Government`s position on its full commitment to the European agenda, with strong motives to remove any potential obstacles that could jeopardize this process.

In his address to the media, Osmani also referred to the latest developments in the country, expressing confidence in the readiness and maturity of the institutions to show firmness and implement the rule of law. "The prosecution on the case "Extortion" is a confirmation that the system is fully operational, and I expect no concessions to anyone in this process, which is the only condition to regain the trust of the citizens and to justify the confidence given by our friends and supporters in the Union, such as Finland," Osmani said.

During his visit to Finland, Osmani also had meetings with representatives of the Grand Committee within the Finnish Parliament, led by First Deputy Speaker Jani Mäkelä, as well as in the Directorate for Autonomy and Equality at the Ministry of Justice of the Republic of Finland, where he met with Corinna Tammenmaa, Senior Adviser for Language Affairs.