News
Besimi in Brussels: The initiation of negotiations with the EU will speed up the reforms and will strengthen the credibility of the institutions
16:31, Tuesday, July 15, 2014 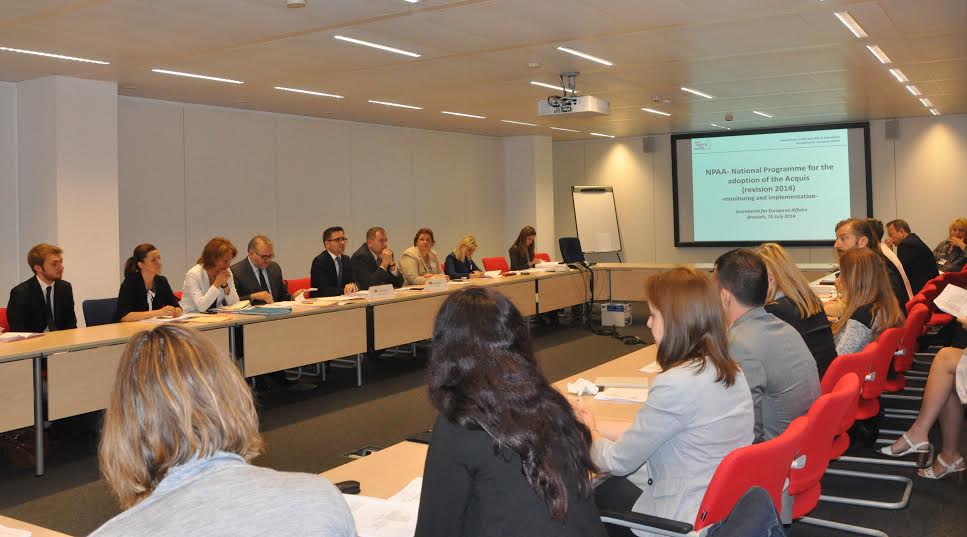 Today, June 15, 2014, during his visit to Brussels, Deputy Prime Minister of the Government of the Republic of Macedonia in charge of European Affairs Fatmir Besimi, PhD has met the Director of the EC Directorate General for Enlargement Ms. Alexandra Cas Granje.
At the meeting the latest political developments in the country have been discussed, as well as the next steps of the new Government. The Deputy Prime Minister Besimi has pointed out that the European Integration remains high priority.

At the meeting has been discussed also the programming of IPA 2014/2020, its concept, its methodology and the structures and plans for its implementation in the upcoming years.
After the meeting, the Deputy Prime Minister Besimi has presented the revised National Programme for the Adoption of the Acquis of the European Union 2014 (NPAA) to the representatives of the European Commission.

He has informed about the key reform efforts and the short-term priorities, the objectives of the NPAA Revision 2014, as well as about the planning process of NPAA, its implementation and the next steps in the process, such as further harmonisation of the legislation, the distribution of financial and human resources and the use of IPA funds.

Besimi has emphasized that the Government of the Republic of Macedonia carries out regular monitoring of the implementation of the reforms in priority areas defined by the High Level Accession Dialogue (HLAD), as for example inter-ethnic dialogue, freedom of expression, rule of law, judiciary, corruption and electoral reforms, public administration reform and economic criteria, and the good neighbourly relations within the platform for continuing the HLAD process.

The Deputy Prime Minister has pointed out that the NPAA 2014 aims at addressing the recommendations of the Enlargement Strategy 2013/2014 and the Macedonia Progress Report, meeting the priority reforms provided under HLAD, further implementation of the Stabilisation and Association Agreement, as well as the continuation of harmonisation of the national legislation with the European Union.
"The Reforms in Macedonia have not been implemented only for initiation of the negotiations, but also for improving the living standards of the citizens and they would be significantly intensified provided that the EU Council finally reach the decision on initiating the accession negotiations with the Republic of Macedonia" - said Besimi at the NPAA presentation.

The Deputy Prime Minister of the Government of the Republic of Macedonia in charge of European Affairs, today in Brussels, will also address in the Centre for European Policy Studies (CEPS), and yesterday he has met the Executive Secretary General of the European External Action Service, Mr. Pierre Vimont and the Director for the Western Balkans within the European External Action Service, Mr. Fernando Gentilini.