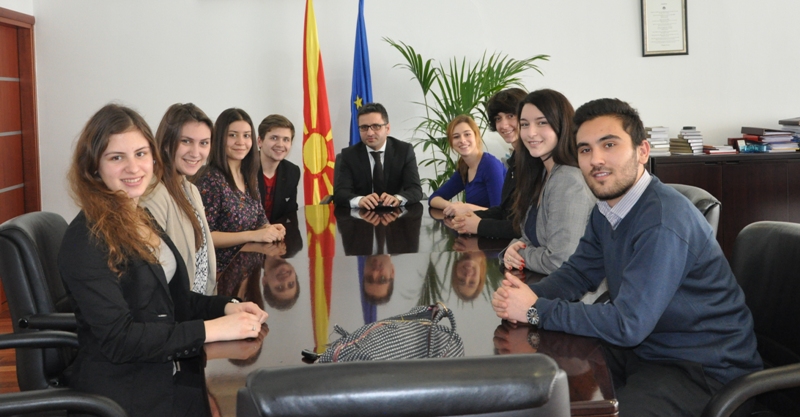 The Secretariat for European Affairs (SEA) was host to the first awarded 5 high school students, participants from the last national simulation of the Model European Parliament, who spent “One day for EU” with the Deputy Prime Minister (DPM) Fatmir Besimi.

These young delegates were able to take part in all official meetings during a full day with Deputy Prime Minister Besimi, including a meeting with MEP Richard Howitt, and a coordinative meeting for IPA, part of SEA regulatory meetings with IPA fund beneficiaries. They joined university students in a discussion with the Howitt and Besimi, and had an opportunity to express their opinions and views related to the EU integration process of the Republic of Macedonia.

The five high school students had a chance to also meet the Heads of Department and employees at SEA, as well as the Cabinet of the DPM, in order to better understand the work of SEA, it actors, and DPM Besimi himself.

Model European Parliament – Macedonia is a program for high school students, which operates as an extra-curricular activity in high schools across all of Macedonia. By simulating the work of the European Parliament this program allows students to assume the practical role of EU parliamentarians, and through the simulations of European Parliament’s work, to develop the skills needed for debating, public speaking, lobbying, writing resolutions and similar.

The national simulation of the European Parliament is an event organized by NOVA International Schools and supported by the Secretariat for European Affairs, held biannually, where 100 students from 20 secondary schools in the Republic of Macedonia converge to simulate the work of the EU parliament over the course of a few days. It is also an initiative that is part of SEA’s “Youth for Europe”agenda.