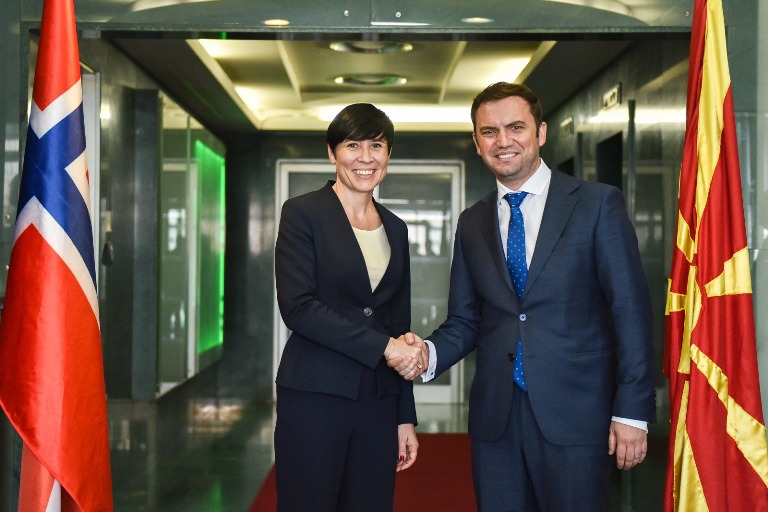 "The Kingdom of Norway is not a member of the European Union, but it is our important partner and supporter of the European integration process of North Macedonia from the very beginning, and I am satisfied that our cooperation continues in the upcoming period, which is decisive for the European perspectives of the country" stated Osmani, passing to Minister Soreide the appreciation of the Government for ratifying the NATO Protocol as part of the overall support and a clear expression of the close bilateral relations between the two countries.

During the meeting, the interlocutors discussed the bilateral cooperation, the project support provided by the Kingdom of Norway to the Republic of North Macedonia, and the Euro-Atlantic aspirations of our country, with particular emphasis on the content of the European Commission's Report on the country and the conclusions of the European Council.

Furthermore, the interlocutors expressed mutual satisfaction with the work of the UNOPS office that was opened last year, certainly in the direction of implementation of the funds from the Kingdom of Norway and Sweden, which bilateral support is the basis for the implementation of UNOPS projects in the Republic of North Macedonia.

In this direction, Osmani once again expressed gratitude for the targeting of the Secretariat for European Affairs as a beneficiary of these funds in support to the administration in its preparation for the challenges that lie ahead, preparing the negotiation capacities with the European Union, while expressing confidence that the project "Nordic Progress" implemented by UNOPS in North Macedonia will successfully achieve the goal to support the Government, thus strengthening the capacities of the country's  administration for integration in the EU.