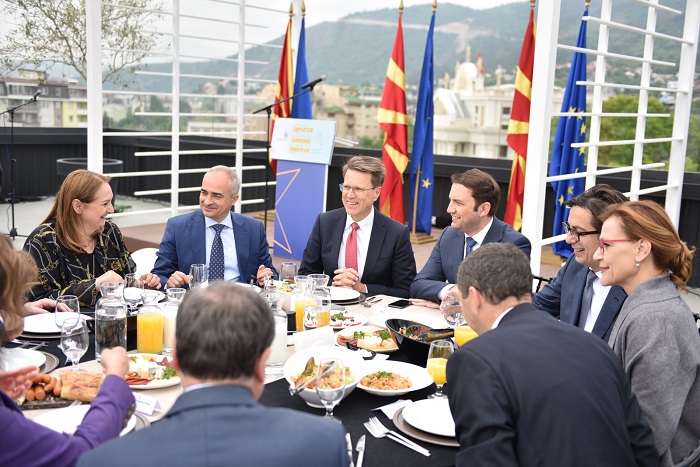 "We mark this sixty-nineth anniversary of the Schuman Declaration, an event marking the creation of the European Union, the most important and greatest civilization benefit of the modern world; a project that for 70 years has provided peace, stability and prosperity, turning Europe into the best place to live", Osmani stressed, pointing out the successes of the Republic of North Macedonia in its aspirations for membership in the European Union.

"The Republic of North Macedonia joins the aspirations of the member states in the construction of a sound, more stable and more efficient Europe, and in the future will work towards achieving these goals," emphasised Osmani, pointing to the expected start of the negotiations as an important part in this process.

The EU Ambassador to Macedonia, Zhbogar, addressed at the event, highlighting the progress of the country, expressing hope for a rapid verification of the country's success, confirming European perspectives in the forthcoming period.

A short address was given by the elected President, Stevo Pendarovski, who emphasised his commitment, as a future President, for successful European integration of the country. Pendarovski made a parallel of the presidential elections on which he was elected as a process that was important to the country not because of his election, but because of the process for himself, as an expression of the democratic and political maturity of the country, in the direction of meeting the criteria for membership in the Union. Similarly, Pendarovski reminded of the forthcoming European elections, as an important challenge not only for the member states participating in these elections, but for us as well, the candidate countries, who closely follow the political wind that will be reflected in the results of these elections.