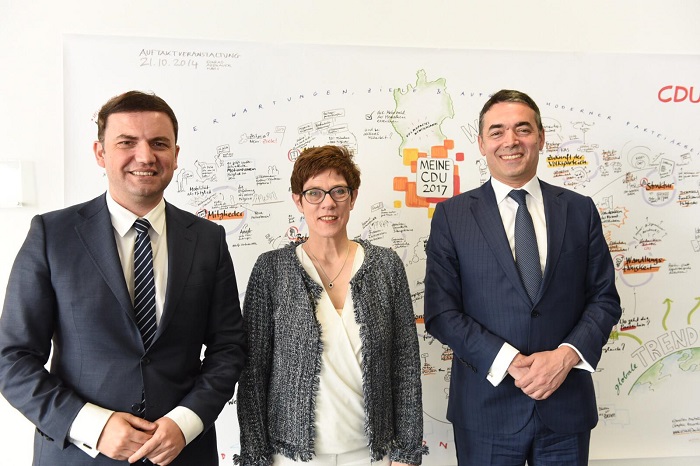 The Deputy Prime Minister in charge of European Affairs, Bujar Osmani, along with the Minister of Foreign Affairs, Nikola Dimitrov, met with the president of the Christian Democratic Union (CDU) of Germany, Annagret Kramp-Karrenbauer within the framework of their working visit to the Federal Republic of Germany.

“We have two days of extremely important meetings and activities in Berlin. Germany is our key European partner and supporter and our goal is to offer our German friends as many arguments as we can within these two days as to why we deserve to take the next step towards the European Union and to open accession negotiations. Therefore, we briefed the new CDU/CSU leader on where the Republic of North Macedonia was less than two years ago and where it is today, an example of a good neighbour and reliable partner in the Region. We have achieved a lot and we continue to give our all in working both in and out of the country, so that we ensure, alongside our partners, an acceptable European perspective for our country” – Minister Dimitrov said.

“Speaking of European integrations, we have always considered Germany our strategic partner, whose initiatives provide the motivation and perspectives for our success”, Osmani stressed, voicing clear expectation that this support and mutual cooperation will continue in the future. “In this forthcoming period we need all the political support of all our friends inside the EU so that we can expand the European story to include the Balkans, and to eliminate the European skepticism that penetrates the outskirts of Europe, by offering clear and unequivocal support from EU member-states for the EU perspectives of the Republic of North Macedonia as the torchbearer of the European idea among Western Balkan states” – Osmani added, noting the expectations that the upcoming EU summit this June will confirm last year’s decision to open accession negotiations with the Republic of North Macedonia.

As part of their working visit to Berlin, Deputy Prime Minister Osmani and Minister Dimitrov are set to meet the Minister of State for Europe, Michael Roth and to participate in the briefing before the Committee on EU at the German Bundestag where they will brief on the course of implementing the political obligations stemming from the Prespa Agreement and the Treaty on Good Neighbourliness with Bulgaria, as well as on the progress in implementing reforms in areas foreseen in last year’s EU summit conclusions, as the key criteria for this year’s summit in June when a confirmation of the decision to open negotiations with the EU is expected.