News
OSMANI: BOTH EU MEMBERS AND CANDIDATE COUNTRIES HAVE A COMMON DUTY TO CREATE A SAFER AND MORE STABLE EUROPE
11:58, Friday, April 05, 2019 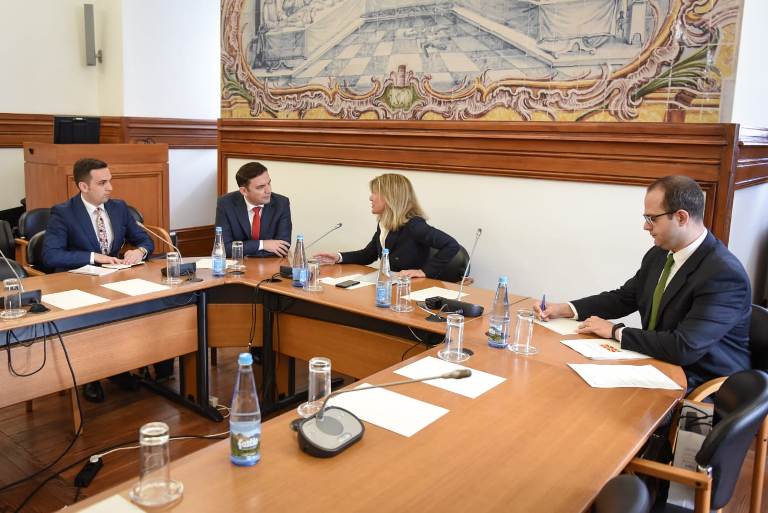 At the meeting they opened the topics for the support by Portugal for the European integration of the Republic of North Macedonia, the bilateral cooperation between the Parliaments of both countries, as well as the topics related to the European challenges, such as: Brexit, influence of fake news, the breakthrough of the radical populism, the nationalism, etc.

"We are witnessing the probably most turbulent period for the European continent since the Second World War. The European elections are burdened with the challenges posed by the Brexit process, and the continent is still under the influence of the flood of populism, radicalism and extremism, and the current hybrid threats are still present," Osmani said. In this regard, the interlocutors jointly emphasized that both the member states and the candidate countries for EU membership have a common duty to create a safer, more stable and more prosperous Europe, so that Osmani emphasised that the Republic of North Macedonia is a stable EU partner on the Balkans.

During the conversation, Deputy Prime Minister Osmani briefly informed her interlocutor about the implemented reforms, the achieved results, the way institutions are adapting to the reforms, the upcoming elections, as well as other processes related to the European integration of our country.

During the meeting, the two interlocutors jointly agreed that the bilateral co-operation between the two countries should be expanded between the two parliaments, in order to facilitate the sharing of the experience of colleagues from Portugal, thus expressing mutual satisfaction from the establishment of the cooperation group with Portugal in our Parliament.

"The National Parliaments play a very important role in the harmonisation of legislation and their alignment with European acquis". In this regard, I expect stronger activities in the upcoming period, in the direction of mutual cooperation between the two legislative institutions, through the already established group for cooperation with Portugal, as well as through the utilization of the Portuguese experience in this process "- added Osmani. In this context, it was jointly concluded that the role of the national parliaments and the European Parliament is crucial to the enlargement process and to the new political reforms of the EU.

As part of his working visit to Portugal, Deputy Prime Minister Osmani will have a meeting with the Minister of Foreign Affairs of the Republic of Portugal, Augusto Santos Silva, and on Sunday (7 April) he will participate on the Annual Horasis Global Meeting  which is one of the leading world business global leaders where this year's discussions will focus on the topic "Catalysis of the benefits of globalisation".