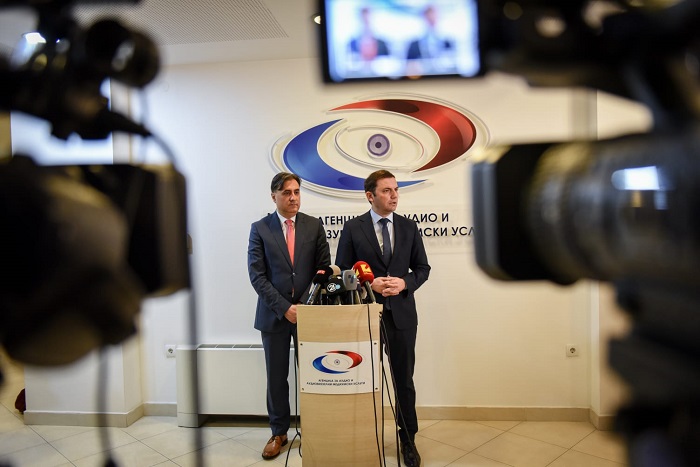 Deputy Prime Minister in charge of European Affairs, Bujar Osmani, together with a delegation from the Secretariat for European Affairs, held a working meeting with the representatives of the Agency for Audio and Audiovisual Media Services, led by the Director, Zoran Trajcevski.

"The work of the media and the protection of freedom of expression are important areas where we still need progress to meet the European standards and to create capacity to deal with the contemporary challenges of false news, hate speech, etc.," Osmani stressed, pointing out the importance for the development of the democratic capacities of the state, as well as the importance of fulfilling the European criteria in the period before the new report of the European Commission.

"We have a chance in the forthcoming period to create a fair and competitive atmosphere in which the upcoming presidential elections will take place, and thus demonstrate the democratic and social maturity that will be noted in the European Commission Progress Report, and which content will depend on the confirmation of the decision of the member states at the June summits, to start negotiations with the EU this year," Osmani stated, pointing to the assurances he received from the AVMS members and from Trajcevski, about the capacity, readiness and decisiveness of the Agency to provide a fair and competitive atmosphere during the campaign.

Osmani reaffirmed the Government's willingness to cooperate in order to provide all the preconditions and obligations related to the work of the Agency, as well as those generally related to the media sector.