News
OSMANI: THE TRANSFORMATION OF SECURITY SERVICES IN ACCORDANCE WITH THE EUROPEAN RULES IS EVIDENT
13:50, Tuesday, March 12, 2019 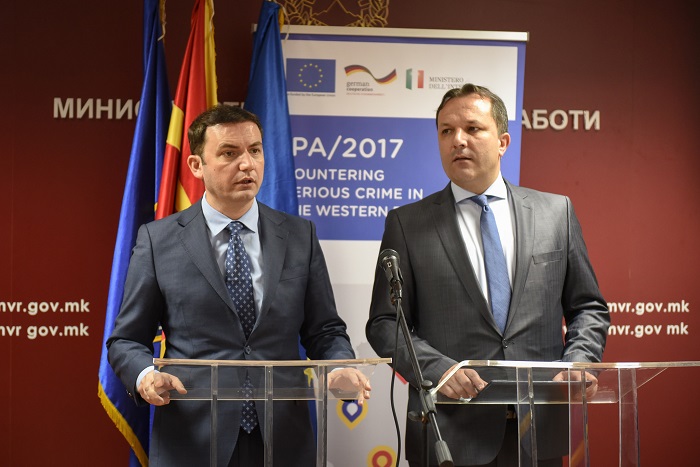 Deputy Prime Minister in charge of European Affairs Bujar Osmani attended the promotion of the National Coordination Centre for organised crime, where together with the Deputy Prime Minister and Minister of Interior of the Republic of North Macedonia, Oliver Spasovski addressed the audience.

In his address Osmani underlined the importance of the reforms and the results related to the fight against organised and serious crime, as part of the obligations undertaken by the Republic of North Macedonia for implementation of the reforms in the respective areas.

"Today's promotion of this National Coordination Centre for organised crime comes in an extremely important period for the country, when all efforts of the state are invested in the delivery of as many reforms as possible, but also better quality reforms that will provide the so- called "track-record", i.e. clear examples of the implementation of the reforms, for which, I expect an important contribution precisely from the reports on the work of this centre and similar bodies," Osmani said, pointing out the funds from the IPA 2017 programmes - the project for prevention of serious crime in the Western Balkans, as well as financial support for the mapping of funds from IPA 2020, through which funds are provided for this coordinative body, and in general, for the fight against organised and serious crime.

In this direction, Osmani expressed satisfaction with the work of the team for reforms Ministry of Interior, led by Minister Spasovski, for the extremely successful implementation of the undertaken obligations in Plan 369 and Plan 18, both in the area of OTA, the reforms in the ASC, and the strengthening of the capacities in the fight against organised and serious crime. Therefore, Osmani added, the Republic of North Macedonia shows a serious level of maturity, which he expects to result in a confirmation of the decision by the European Council in June for start of the negotiations with the European Union this year.