News
OSMANI: MACEDONIA AND THE WHOLE BALKANS HAVE GREAT EXPECTATIONS FROM THE ROMANIAN PRESIDENCY WITH THE EU
11:52, Tuesday, December 18, 2018 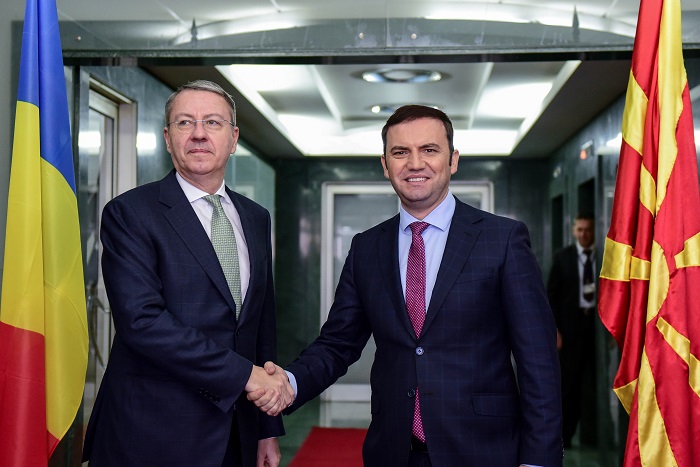 Deputy Prime Minister in charge of European Affairs, Bujar Osmani, had a meeting with the Minister for European Affairs of Romania, George Ciamba, who pays a working visit to the Republic of Macedonia right before the takeover of the EU Council Presidency by Romania from January 2019.

At the meeting they opened the topics on the challenges Macedonia faces on the road to EU membership, as well as the role of Romania, especially during their chairmanship of the EU Council in the first half of the next year.

"Romania is a long-time supporter of the Republic of Macedonia, especially for our European and Euro-Atlantic integrations, and today's visit, in a period shorter than a month after the start of the undertaken EU presidency, is a clear indicator of the support we are expecting from their presidency of the Council of the EU "- Osmani stressed during the meeting.

During the meeting, the two interlocutors exchanged views on the European Union enlargement process, the Euro-Atlantic perspectives on the entire Balkans, as an essential element in the direction of the stability of the region, but also on strengthening of the security and stability of the whole of Europe, and the Deputy Prime Minister Osmani expressed hope that Romania's current interest in the Balkans will continue at a faster pace, especially in the first half of next year during their chairmanship of the Council of the EU in the direction of verification of the European the perspectives of the Western Balkan countries.