News
OSMANI: THERE ARE NO MAGIC AD HOC SOLUTIONS FOR AERO POLLUTION, ON THE CONTRARY, ONLY WITH LONG-TERM SUSTAINABLE AND PLANNED ACTIVITIES RESULTS CAN BE PROVIDED
12:06, Monday, December 10, 2018 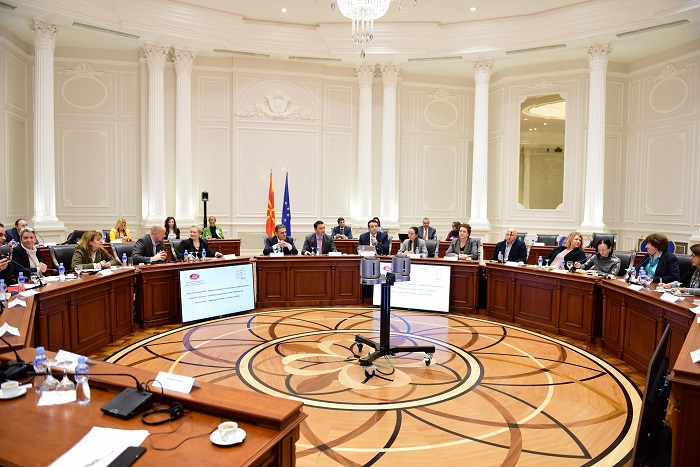 Today in the Government of the Republic of Macedonia a donor meeting was held where the Government's program for reduction of the air pollution was presented at which the Deputy Prime Minister of the Government in charge of European Affairs, Bujar Osmani, the Minister of Environment and Physical Planning, Sadula Duraki and the head of the inter-sectoral group for pollution management, Jani Makraduli.

Deputy Prime Minister Osmani firstly expressed his great gratitude for the interest of the donors in the country, stressing that today's donor meeting which was dedicated to the presentation of the government's program for reduction of air pollution is an excellent opportunity for them, as they directly point out the places where they can most accurately and most effectively intervene with their donations.

"The aero pollution is one of the most complex, challenges facing the government, for which there are no magical ad hoc solutions, but on the contrary, only through a stable long-term strategy we can deal with this challenge," Osmani stressed, pointing out that this is a very expensive process for which he expects crucial support from the numerous donors for accelerated implementation of the Government's programe.

The Minister of Environment and Physical Planning Sadula Duraku emphasized the urgency of the challenge, pointing out that in the past decade, several cities in the country, especially Skopje, Tetovo and Bitola are among the 10 most polluted cities in the country. Duraku emphasized to the donors that the Ministry is already working with several donors on several initiatives, and that it expects the Government's programme to show the initial results in the next two years, as a basis for building a long-term strategy for dealing fully with this problem. "The measures for which we are now seeking funds should ensure a reduction in pollution in large cities up to 50%, which is a real benchmark to check the success of this programme, as well as the basis for its upgrading into a long-term strategy," Duraku said.

At the conference, the Government's plan was presented by the head of the inter sectoral working group on pollution management, Jani Makraduli, pointing to the undertaken measures in the analysis of the causes, as well as the offered activities for their implementation. " The Success in dealing with this challenge depends on the wideness of the implementation of the measures, the intensity, which will, to a large extent, depend on the opportunity to provide as much funding as possible for this purpose" - added Jani, pointing precisely to the parts and the activities envisaged in the Government programme, where donor funds would have the greatest effect.

At the donor conference, conclusions were adopted on the coordination of foreign aid for dealing with air pollution, as well as intensified communication in order to effectively allocate funds.