News
OSMANI: THE GOVERNMENT DEFINED THE INVESTMENT PRIORITIES WHICH IMPLEMENTATION WILL BE INTENSIFIED IN THE FORTHCOMING PERIOD
14:12, Wednesday, November 28, 2018 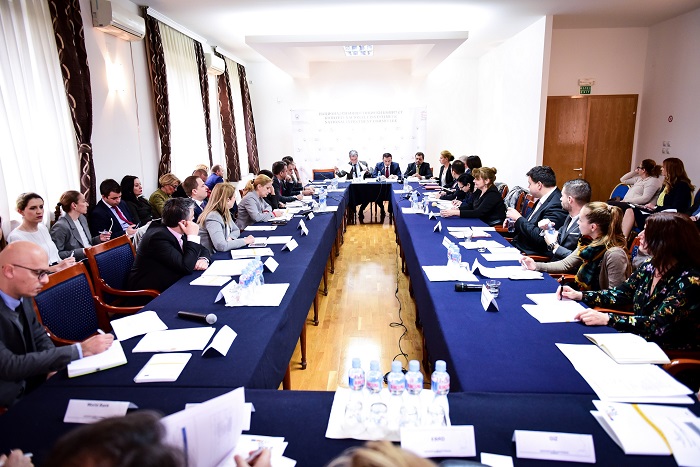 Deputy Prime Minister in charge of European Affairs, Bujar Osmani, in the role of National IPA Coordinator (NIPAC), together with his counterpart, Deputy Prime Minister in charge of Economic Affairs, Kocho Angjushev chaired today's meeting of the National Investment Committee in its full composition, in addition to the Government representatives, were beside Government's representatives took part the largest donors of foreign assistance for major projects in Macedonia.

"Allow me, on behalf of the Government, to express my sincere gratitude for your participation through donations in the construction of a modern, advanced European society in Macedonia, as part of the strategy of interconnectivity of the countries of the Western Balkans, but also their connection with the European Union", stated Osmani at the beginning of his address, pointing out that so far, only through the instrument "Western Balkans Investment Framework" (WBIF), 112.8 million euros were spent for the implementation of 29 projects financed by the European Commission.

Furthermore, Osmani referred to the donors for the activities undertaken in the period between the two NIC meetings, in regard to utilise the potentials for donor funds in the implementation of the major investment projects.

"Within the third call from the WBIF investment framework, the two projects we submitted, in a total amount of about 23 million euros, received a political green light at the Summits in London and Sofia, as well as a positive assessment by WBIF, where we expect a final approval next month," Osmani stressed, thus pointing to the projects for reconstruction of the section" Bukojachani - Kichevo" as part of the roadway Gostivar - Kichevo in an amount of over 20 million euros, as well as the project for expansion of the road section Kriva Palanka - border crossing point "Deve Bair" Bulgaria, amounting to over 2.5 million, as two major projects of the third call of WBIF whose implementation is expected to begin soon.

In addition, Osmani also informed about the new list of priority investment projects, which the Government adopted at yesterday's session, defining the projects for which donors will be able to contribute with grants in their implementation within the fourth WBIF call. "There are 108 significant projects for the country on the list, sorted according to priority for their implementation determined by the Government, and for which, in the next period the Government will dedicate itself to their implementation by providing grants, but also through loans and budget financing", stressed Osmani, pointing out the big projects for which grants will be sought, such as the Skopje-Blace highway to connect Macedonia with the Kosovo, where a grant of Euro 26.7 million will be requested, followed by a joint railway border crossing with Serbia on Tabanovce in the amount of over 5 million euros, as well as the gasification with the Republic of Greece of 10 million euros.

In addition to the meeting of the National Investment Committee (NIC), the line ministers referred to donors for the proposed projects in their sectors, their impact on the country's development, and about the opportunities for donors to participate in their implementation through grants.