News
OSMANI: THE UNIFICATION OF THE ALPHABET IS LITERARY, CULTURAL AND INTELLECTUAL UNITY OF THE ALBANIANS
15:11, Tuesday, November 20, 2018 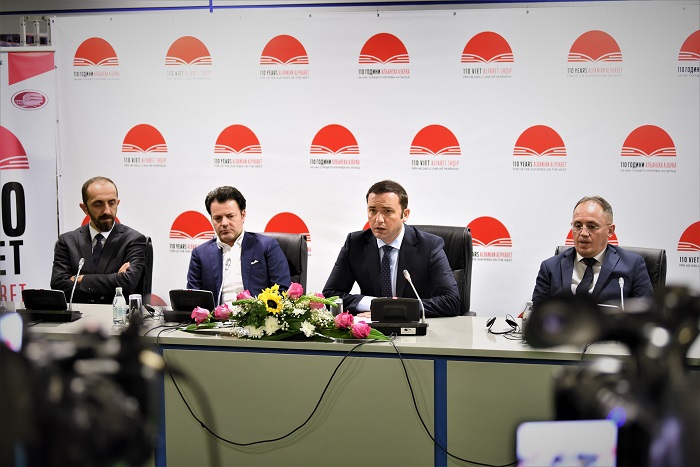 Today, in the premises of the Secretariat for European Affairs, a press conference was held on the occasion of the celebration of 22nd of November - the day of the Albanian alphabet and the 110th anniversary of the Bitola Congress, within which the Deputy Prime Minister in charge of European Affairs, Bujar Osmani, the Director of the Institute for Spiritual and Cultural Heritage of he Albanians, Skender Asani, the State Secretary at the Ministry of Culture, Valmir Aziri and the Albanian violinist - Shkelzen Doli, who will perform at the central event marking the jubilee, together with the Macedonian Philharmonics.

"The day when the intellectual potentials of Albanians from all over the world manage to unite toward unification of their own alphabet is the historical point of the literary, intellectual, cultural and ethnic unity of all Albanians," Osmani stressed, pointing out the fact that this historic event, 110 years ago was held in Bitola, which, Osmani said, has special importance for the Albanians from Macedonia. In this regard, Osmani added that this is why the Day of the Bitola Congress - November 22nd, as the Day of the Albanian Alphabet, is a holiday and a non-working day for the Albanians from Macedonia, but also an important day for all citizens of the country, confirming, in the historical context, this country as a world cradle of literacy.

"For the Day of the Albanian Alphabet and 110th anniversary of the Bitola Congress, under the slogan" For Us, the Sun rises from the west," we have organized several events in Skopje and Bitola, which will be crowned with a violin concert by the famous artist Shkелzen Doli with the Macedonian Philharmonic Orchestra, under the baton of Michael Maciaszczyk from Poland, which will be held at the premises of the Macedonian Philharmonic Orchestra on Thursday, November 22nd, at 19:00 o'clock," said Osmani, confirming that the event will be broadcast live on the second program service on MRTV 2, and pointed to the announcements of direct transmission and some national televisions from Kosovo and Albania, as well as live coverage online.

Within the celebration of the day of the Albanian alphabet and the 110th anniversary of the Bitola Congress, there are also more events in Skopje and Bitola, such as the Panel within the Museum - House of the Albanian Alphabet in Bitola, followed by a scientific conference in the hotel Epinal, as well as the promotion of several books and scientific research papers, and from today it will be officially installed on the web site www. 110vjetalfabet.mk, on which will be installed interesting historical facts about the unification of the alphabet, for the Congress in Bitola, as well as artistic content from Albanian literature, poetry etc.