News
OSMANI: WE WILL PROVIDE ALL PRECONDITIONS FOR CONFIRMATION OF THE DECISION FOR START OF NEGOTIATIONS IN JUNE 2019
12:00, Monday, November 12, 2018 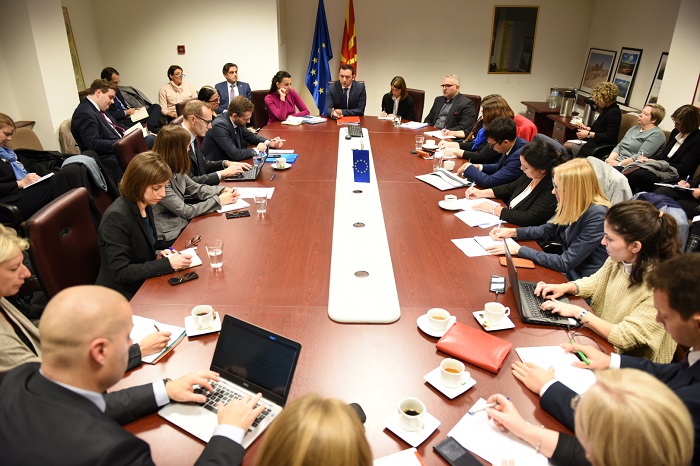 Deputy Prime Minister in charge of European Affairs Bujar Osmani, during his working visit to Brussels, had an informal briefing with representatives of the Working Party on the Western Balkans Region (COWEB).

At the meeting, Osmani briefed on the current political situation in the country, assessing the political climate as positive for implementation of the envisaged reforms, especially now, after the first decision to start the constitutional changes in accordance with the Prespa agreement, thus unpacking the work of the Parliament.

"As a Government and a country, we are working deliberately to fulfil all the remarks and recommendations contained in the European Commission Report, especially those that refer to the conclusions of the June summits of the Council of the EU, by which we will build a solid portfolio that will ensure the confirmation of the decision by the Council next June and the start of the negotiations," Osmani stressed, pointing to the progress of the implementation of the constitutional changes, and the reforms of Plan 18.

"Plan 18 is already adopted by the Government and its implementation, and for now it goes smoothly. I expect that all key areas will be addressed on time, bearing in mind that the pace of implementation of the reforms has intensified after the opening of the Parliament with the first green light given for the constitutional changes", Osmani stressed, pointing out the progress in the formation of the negotiating structure and the preparation of the state for the start of the negotiations.

Osmani pays a working visit to Brussels, where, in addition to the briefing with representatives of COWEB, he will have a working meeting with EU Commissioner for Enlargement and Neighbourhood Policy, Johannes Hahn.