News
OSMANI: THE IMPLEMENTATION OF THE PRESPA AGREEMENT - AN INCENTIVE FOR THE INTEGRATIONS OF THE WHOLE REGION
14:31, Thursday, October 04, 2018 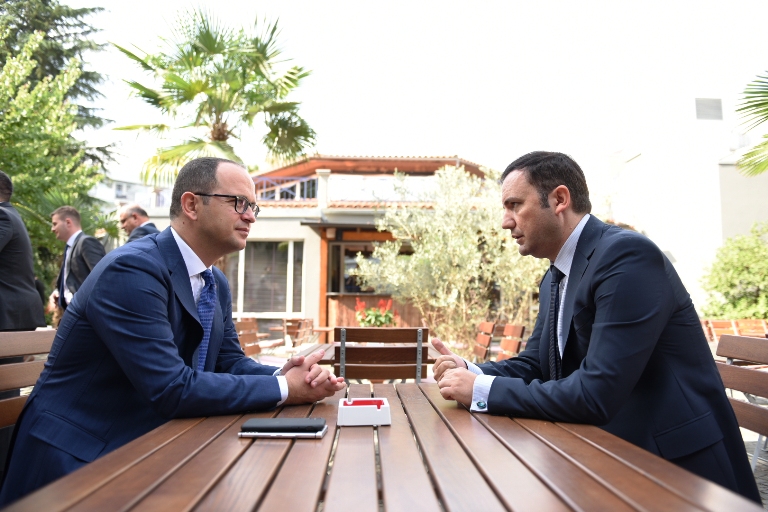 Deputy Prime Minister in charge of European affairs and chief negotiator and head of the state delegation for EU negotiations, Bujar Osmani, together with his deputy and chief technical negotiator Bojan Maricic, today are paying a working visit to Tirana, Albania, where together with the ministers and deputy prime ministers for European integration of the countries of the region, participated in the Third Conference on Western Balkans Accession Reforms (WBAR), where he had bilateral meetings with the Minister for Europe and Foreign Affairs of the Republic of Albania, Ditmir Bushati, and the Minister for European Integration of the Republic of Kosovo, Dhurata Hoxha.

During the talks with Minister Bushati, they opened the topics on the challenges that the two countries face moving to the European Union, as well as the development of the bilateral relations between the two countries were opened, with the two interlocutors expressing satisfaction that besides the common clear and precise time frame for start of negotiations with the European Union in June next year, including clear and precise directions and remarks on the success of the process - "Last week the two countries jointly started the screening process which is an additional impetus to strengthen cooperation, especially in the exchange of experiences and acquired knowledge for progress in the integration process "- stated Osmani.

During the meeting, Deputy Prime Minister Osmani urged his interlocutor that Albania, as a NATO member state, can use its position to help our country on its way to full membership in the North Atlantic Alliance. In this context, he underlined that the experience of the Republic of Macedonia within the Stabilization and Association Process, in particular the experience of the Secretariat for European Affairs, is a significant potential for exchange with the colleagues from Albania.

During the meeting with the Minister for European Integration of the Republic of Kosovo, Dhurata Hoxha, the interlocutors emphasised the commitment of both countries on the European perspective of the region, as well as cooperation in this regard between the two countries. "The high support of the citizens on the referendum is a strong momentum for implementation of the Prespa Agreement, thus the Republic of Macedonia will fully unlock the European and Euro-Atlantic integrations," Osmani said, pointing out that this progress, as well as the full implementation of the Prespa agreement is an impetus to the entire region for substantial and courageous compromises among the countries of the Western Balkans, thus pointing to the relations between Kosovo and Serbia.

At today's Conference on Western Balkan Accession Reforms (WBAR), a joint declaration is expected to be signed, where, inter alia, the efforts to promote good neighbourly relations will be reaffirmed, the promotion of the regional co-operation, as well as the European prospects of the Western Balkan countries, followed by an address by the Deputy Prime Minister Osmani on the panel dedicated to EU communication to the public.

Today's Conference on the Western Balkan Accession Reforms (WBAR) in Tirana, supported by the Austrian Presidency of the Council of EU, is the third one in a row, preceded by the first one held in Skopje in 2015 and the second one held in Podgorica in 2017.