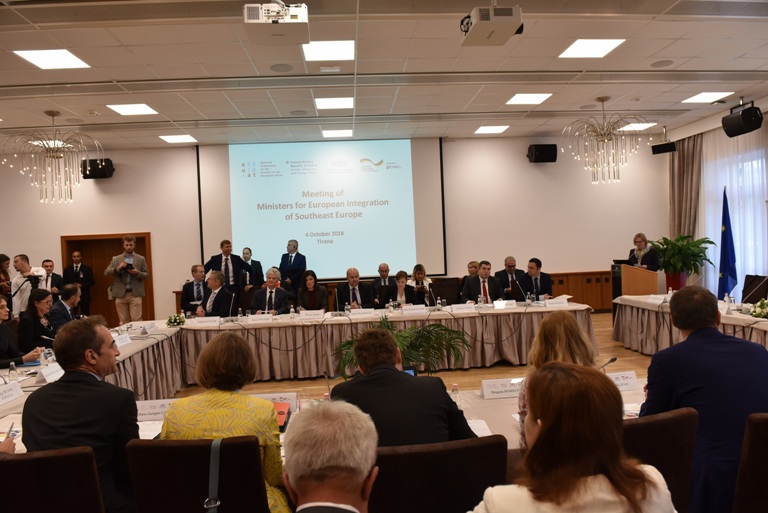 Deputy Prime Minister for European Affairs, and chief negotiator and head of the state delegation for negotiations with the EU, Bujar Osmani, together with his deputy and chief technical negotiator Bojan Maricic, are currently paying a working visit to Tirana, Albania,where together with the Ministers and Deputy Prime Ministers for European Integration of the countries of the region participated in the Third Conference on Western Balkan Accession Reforms(WBAR).

Within the conference, a joint declaration was signed by which the Western Balkan countries, relying on the European Union's commitment to the enlargement policy, keeping this topic high on their agenda, reaffirmed their efforts to promote good neighbourly relations, reaffirmed their commitments towards regional cooperation through mutual support and exchange of best practices in all aspects of the pre-accession process, as well as all other efforts towards the European perspective of the whole Western Balkans.

On the panel dedicated to the EU's communication to the public during the conference, the participants debated the successes, challenges and potentials for enhancing the communication of European values within the Western Balkan countries.

The main threats were the false news, which penetration threatens the objective reality and the truth, which, in turn, creates the ground for the penetration of radical political offers. In this context, it was emphasised that it is necessary to promote cooperation and communication between the countries of the Western Balkans, in order to assist each other in addressing these challenges.

Today's third Conference on Accession Reforms in the Western Balkan Countries (WBAR) in Tirana, is backed by the Austrian Presidency of the Council of the EU, preceding the first one held in Skopje in 2015 and the second one held in Podgorica in 2017.