News
OSMANI: WE WILL USE ALL POSSIBILITIES TO IMPLEMENT CITIZEN'S DECISION IN THE PARLIAMENT
11:15, Thursday, October 04, 2018 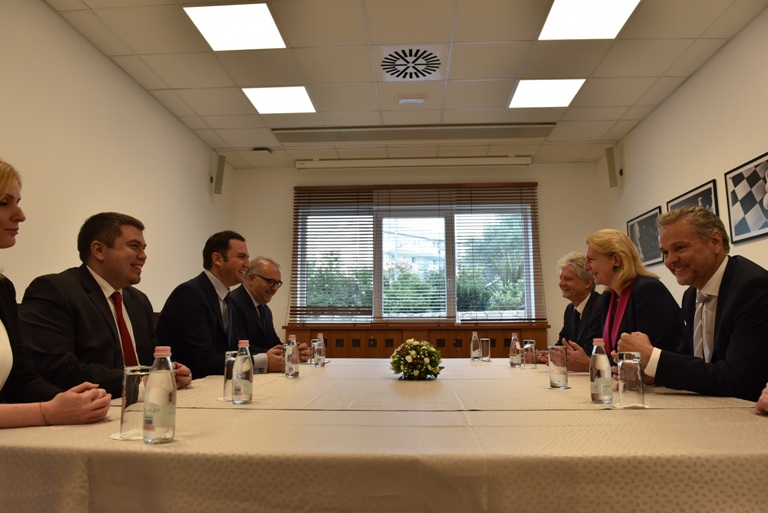 Deputy Prime Minister for European Affairs, and chief negotiator and head of the state delegation for negotiations with the EU, Bujar Osmani, together with his deputy and chief technical negotiator Bojan Maricic, are currently on a working visit to Tirana, Albania, within where together with the Ministers and Deputy Prime Ministers for European Integration of the countries of the region they participate in the Third Western Balkans Accession Reform Conference (WBAR).

Prior to the conference, Osmani had a bilateral meeting with the Federal Minister for Europe, Integration and Foreign Affairs of Austria, Karin Kneisl, expressing sincere gratitude for Austria's commitment to the region, especially in the part of the Austrian Presidency, raising the enlargement process and integration of the region as one of the three top priorities of the Union. Osmani underlined that Macedonia will remain committed to the European agenda by deepening of the reform momentum, but will resolutely continue the implementation of the European rules, standards and values, thus contributing to the construction of a stronger and more stable Europe.

"We had an extremely important referendum process in the country, in which over 600,000 citizens expressed a clear political will to implement the Prespa Treaty, and move the country forward in the integration processes. We have an obligation to use all possibilities and implement this Agreement in the Assembly, "Osmani said. He also referred to the challenges faced by the country in relation to the held referendum, and expressed satisfaction with the high support of the citizens of the Prespa Agreement and the EU and NATO membership.

At today's Conference on Western Balkan Accession Reforms (WBAR), a joint declaration is expected to be signed, where, inter alia, the efforts to promote good neighbourly relations will be reaffirmed, the promotion of the regional co-operation, as well as the European prospects of the Western Balkan countries, followed by an address by the Deputy Prime Minister Osmani on the panel dedicated to EU communication to the public.

Today's Conference on the Western Balkan Accession Reforms (WBAR) in Tirana, supported by the Austrian Presidency of the Council of EU, is the third one in a row, preceded by the first one held in Skopje in 2015 and the second one held in Podgorica in 2017.