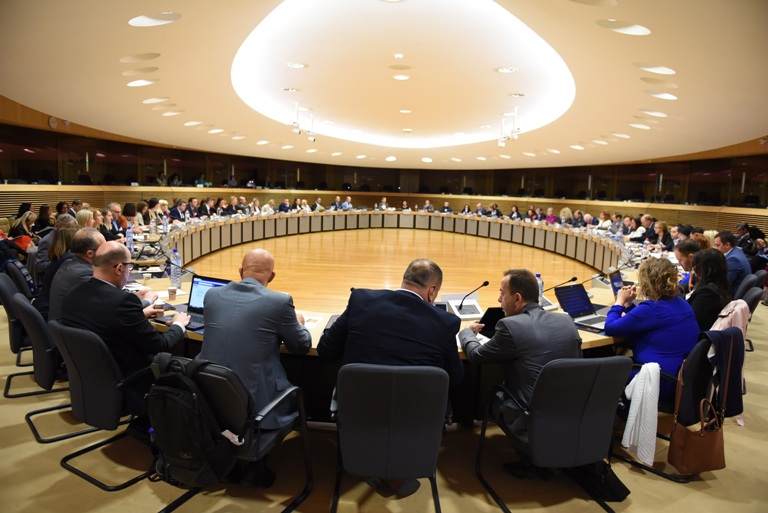 Today, September 27, 2018, exactly at 9 am, at the Berlimoont Building in Brussels - the headquarters of the European Commission, the Republic of Macedonia formally started the screening process, through the presentation of the first Chapter 23 - Judiciary and Fundamental Rights. On this occasion, a high government - state delegation, with over 40 representatives, will stay in Brussels for two days, where the European Commission will present in details its own analysis of the situation from Chapter 23, their expectations, the way they expect to see the negotiations, etc.

At the beginning of the working meeting, the Deputy Prime Minister in charge of the European Affairs and Chief Negotiator and Head of the State Delegation for Negotiations, Bujar Osmani had an address to the representatives of the negotiating structure and the Commission.

"This is a historical moment for our country, and for me a real honour as a Chief Negotiator, to mark the beginning of the screening process as a final stage in the preparation for negotiations for full membership in the European Union," Osmani emphasised at the beginning of his address, pointing out the history of accession to the Union, starting with the Stabilization and Association Agreement in 2001, through the candidate status in 2005, until the first recommendation by the Commission in 2009.

"The European and Euro-Atlantic orientation of the country is the point of unifying our society from the independence itself, and in the process of approximation to the European Union, all previous governments are irrevocably embedded, transferring the interests of the country to their heirs, which continue where their predecessors have stopped, "Osmani emphasised, pointing to the wider inclusiveness within this process, sending gratitude to the administration, the civil sector, the expert public, etc. ...

"We understand that we are starting a complex process, which will take place in several phases, in which thousands of pages of the so-called Acquis, should be transposed in the Macedonian legislation, but let me assure you that the motivation and enthusiasm between the administration, the civil sector, business representatives, but also the citizens in general, from the progress in the European integrations is extremely high, and I assure you that we are ready to deal with this challenge", Osmani stressed, thus pointing to the experience of the current administrative structure that successfully implemented the obligations arising from the Stabilization and Association Agreement liaison and association, and which through its entire professional engagement is preparing precisely for this moment - for the negotiations process.

In the conclusion of his address, Osmani presented the three trajectories under which the Government, as well as the entire state will move within the European integration processes: "The state will simultaneously dedicate to the implementation of the agreements on good neighbourly relations with Bulgaria and Greece, will retain the reform momentum for fulfilling of the remarks and guidelines of the conclusions of the councils, as well as firmly and uncompromisingly entering in fulfilment of the obligations from the explanatory screening, on all three fields in parallel, for the start of the negotiations in June next year"- Osmani stressed, pointing to the historical moment for decision -"A chance that this generation must not miss".

In addition to the meeting, the Minister of Justice, Renata Deskoska, as well as the Director of the Directorate-General for European Neighbourhood Policy and Enlargement Negotiations Christian Danielsson and other representatives of the European Commission, addressed the audience.

The working meeting where the European Commission presents the analysis of Chapter 23 - Judiciary and Fundamental Rights, for the Republic of Macedonia continues throughout the day, and according to the agenda, the working group will continue to work on tomorrow, when it is expected to join the EU Enlargement Commissioner Johannes Hahn.