News
OSMANI: ON A PEACEFUL AND HONOURABLE MANNER THE CITIZENS WILL EXPRESS THEIR WILL ON 30TH OF SEPTEMBER
14:40, Wednesday, September 26, 2018 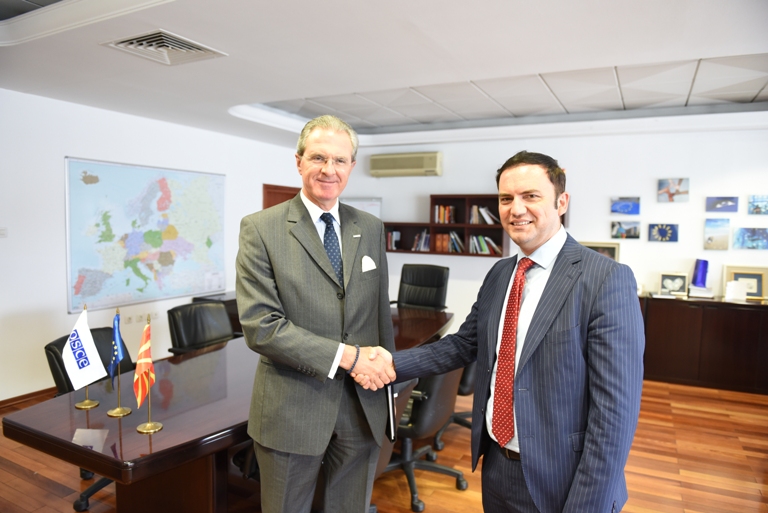 Deputy Prime Minister in charge of European Affairs, Bujar Osmani, today had a meeting with the head of the OSCE Mission to Skopje, Ambassador Clemens Koja in the premises of the Secretariat for European affairs.

Deputy Prime Minister Osmani congratulated the appointment of this position, emphasising the important role of the OSCE Mission in Skopje in support of the Government's reform processes, and expressed hope that such an approach of cooperation will continue during his mandate.

"The OSCE Mission has played an important role in overcoming the numerous challenges that have taken place over the past period, especially in the area of electoral reform, but also in the implementation of the principle of the rule of law", Osmani said, adding that OSCE support from the very beginning of the democratic development of Macedonia, is an inseparable part of the construction of a democratic society.

During the conversation, the interlocutors also referred to the support and the assistance that the OSCE Mission in Skopje provides to the Republic of Macedonia in order to fulfil the reforms in the other areas such as the judiciary, the media, the civil sector, etc., and they also referred to the current political situation in the country and the activities of the monitoring mission OSCE/ODIHR before the upcoming referendum.  "I expect a peaceful and honourable day on Sunday on 30th of September 30, where the citizens in a peaceful and honourable atmosphere will freely express their will," Osmani said.

The interlocutors expressed satisfaction with the cooperation so far and jointly expressed their hope that the support and cooperation between the OSCE and the Government of the Republic of Macedonia will continue in the future.