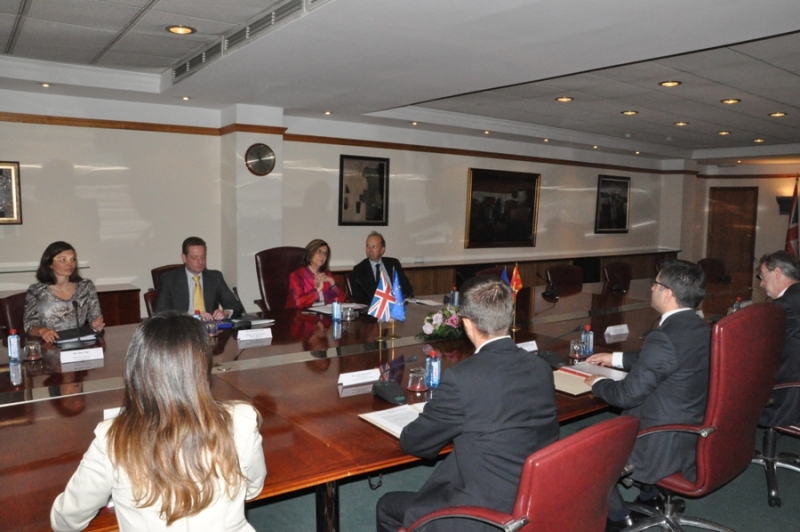 The Deputy Prime Minister of the Government of the Republic of Macedonia, in charge of European affairs, Mr. Fatmir Besimi, today held a working meeting with Mrs. Baroness Frances D’Souza, Lord Speaker in the House of Lords in the Parliament of the United Kingdom.

Within the meeting, Baroness D’Souza emphasized that the United Kingdom is an exceptionally strong supporter of the Republic of Macedonia and its European integration, as well as of the enlargement process of the European Union as a whole.
The Deputy Prime Minister Besimi in the discussions referred to the strong commitment of the Government to fulfilling the reforms for the purposes of approximation to the European Union, as well as to the efforts that the Republic of Macedonia has been making regarding further promotion of good neighboring relations and regional cooperation and regarding the overcoming of the name issue with the Republic of Greece.

“Receiving a date for start of negotiations will be of utmost importance for our people and the Government and it will encourage further reform process, as well as the will of the citizens for accession into the European Union and thus, we ask for support to start the negotiation process for full membership into the European Union, whereas the resolution of bilateral issues is to be made before becoming an EU member”, stated Besimi. This was part of the March Report by the European Union Committee within the House of Lords, which highlighted the importance of further enlargement of the EU, based on the principle of building economic growth and increase of the security of the continent.