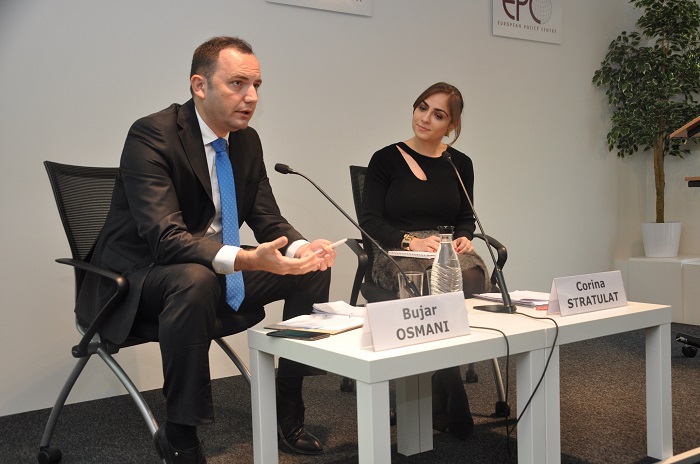 Deputy Prime Minister of the Government in charge of European Affairs, BujarOsmani, during his visit to Brussels, took part in the policy briefing at the prestigious think tank European Policy Centre, dedicated to the Macedonian Plan 3-6-9, as well as the overall process of European integration of the Republic of Macedonia.

In his address, Deputy Prime Minister Osmani briefly explained to the attendees the Plan 3-6-9, its implementation to date in part three, as well as the preparation for the implementation of the remaining parts six and nine. In this regard, Osmani pointed out the reforms in the judicial system, public administration and intelligence services as main areas for which the Government has already prepared draft strategies and action plans, containing all remarks, suggestions and recommendations coming from international partners and relevant institutions. "The plan three six nine is the only unit in which all the reform requirements have been carefully collected so that its implementation shall have a final outcome, after which we expect negotiations." Therefore, Osmani pointed out that the Plan is being implemented in accordance with the planned framework, so that part 3 is already completed and crowned by the holding of the local elections that were held in a fair and free atmosphere, and were assessed as credible by all relevant domestic and international organisations that monitored the electoral process.

Besides the Government"s commitment to implement the necessary reforms, the Deputy Prime Minister Osmani also referred to the Government"s readiness for courageous steps and a positive approach to the closure of the open political issues aimed at improving the European integration process of the Republic of Macedonia. He stressed that all reforms and activities are taking place in coordination with the international partners, which, as he said, has already received positive signals from European officials.

"The next 2018, I expect to be a historic year for Macedonia to move the process of EU integration," Osmani said, adding that he expects this momentum of optimism to be used, and Macedonia should not miss the chance to close EU and NATO issues.