News
Meeting with Loiseau, Minister for European Affairs at the MFA in France WE EXPECT VISIBILITY OF MACEDONIA'S PROGRESS TOWARDS EU AND NATO
12:31, Monday, October 23, 2017 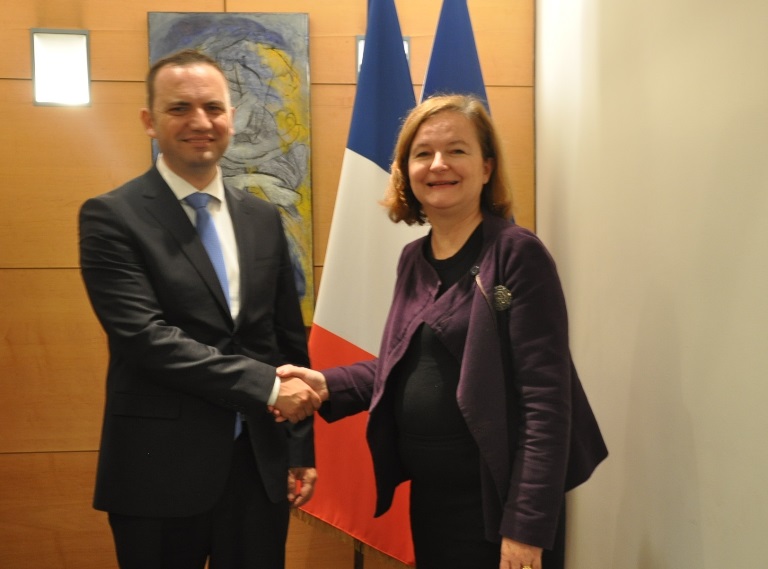 At the meeting, Deputy Prime Minister Osmani and Minister Loiseau discussed the process of Euro-Atlantic integration of the country, as well as for the bilateral cooperation between the two countries.

Osmani informed Loiseau about the implementation of Plan 3-6-9 and pointed out that the implementation of the first part of the Plan - Part 3 is at the very end, having over 80% of the measures implemented, while the remaining 20% are currently implemented. He added that credible local elections are crown of Part 3 of Plan 3-6-9, and given the OSCE-ODIHR's assessment of the elections, which was confirmed by the Delegation of the European Union in Skopje, we had fair conditions for competition, a peaceful election day, something we expect to be repeated in the second round on Sunday.

Osmani also pointed out that the removal of the numerous political obstacles that the Republic of Macedonia was facing on the road to Euro-Atlantic integration, such as the Treaty on good neighbourly relations with Bulgaria, the new draft law on the use of languages, and the launching of the confidence-building measures with the Republic of Greece. Having that in mind, Osmani stressed, the Government has confirmed the declarative commitment to the European and Euro-Atlantic integrations, for which it received clear support from the citizens in the current elections.

Deputy Prime Minister Osmani expressed satisfaction with the current support from France for the country's integration in EU and NATO, as well as the country's positive role in the integration of the Western Balkans countries. "In line with the successful implementation of the obligations by the Republic of Macedonia, I expect concrete steps by the European Union, as well as from the Member States of the Union, which would be aimed at strengthening the European perspectives of the Republic of Macedonia and visibility in the progress towards the EU and NATO "- Osmani stated. He reiterated the Government's ambitions to remove the conditionality of the recommendation by the end of the year at the December Summit, to receive positive report and a clean recommendation from the Commission in April, next year, as well as receining date for start of the negotiations by the end of the next year. Osmani also asked for concrete support from France in this process as a supporter of the EU's enlargement policy, saying that he expects to use his role in the Union's decision-making process to further accelerate the unblocking of the process.

During the visit to France, Deputy Prime Minister Osmani will meet with Emanuel Lenan, Advisor to the Prime Minister's Cabinet, as well as Sabine Thillaye, President of the Committee on European Affairs at the National Assembly. At the end of the visit, Osmani's agenda also includes a meeting with Bertrand Sore, President of the French-Macedonian Group in the National Assembly of France.
Share!
News
Translation