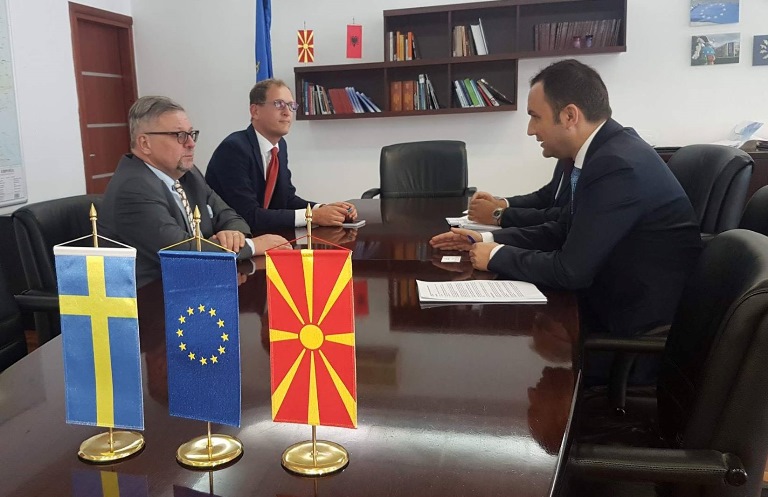 Today Deputy Prime Minister in charge of European Affairs Bujar Osmani had two separate meetings with the ambassadors of the Kingdom of Sweden and Switzerland.

At the meeting with the Swiss Ambassador, Subille Suter Teyada, they discussed the continuous cooperation between the two countries. Deputy Prime Minister Osmani emphasized that it is of great importance that Macedonia remains among the priority countries for obtaining Swiss aid. The new Strategy of the Government of Switzerland for Macedonia for the period 2017-2020, as Deputy Prime Minister Osmani said, is an added value to the reform process, because it provides support in key areas such as democracy, employment, economic development, infrastructure and environment.

Later, Deputy Prime Minister Osmani had a meeting with the Ambassador of the Kingdom of Sweden, Mats Staffanson. He expressed satisfaction with the cooperation so far between the two countries in the European integration process. Osmani thanked for the Swedish support for Macedonia as a candidate country for EU membership through various programs. Sweden has greatly influenced the receipt of a recommendation for Macedonia to start accession negotiations during its chairmanship with the EU Council, as well as obtaining visa liberalization.

At the meetings, Deputy Prime Minister Osmani briefly informed the ambassadors for the last few meetings in Brussels and the neighbouring countries, which were realsed in order to unlock the entire European integration process of Macedonia. He also referred to the Plan 3-6-9, pointing out that there is already a social consensus on the content, and the implementation of the Plan is in an ongoing phase.
He confirmed to the ambassadors that the Plan has full support from the public and from the independent institutions that need to implement it, but that he also expects political consensus to be created, i.e. the plan should also be supported by the opposition.
Share!
News
Translation