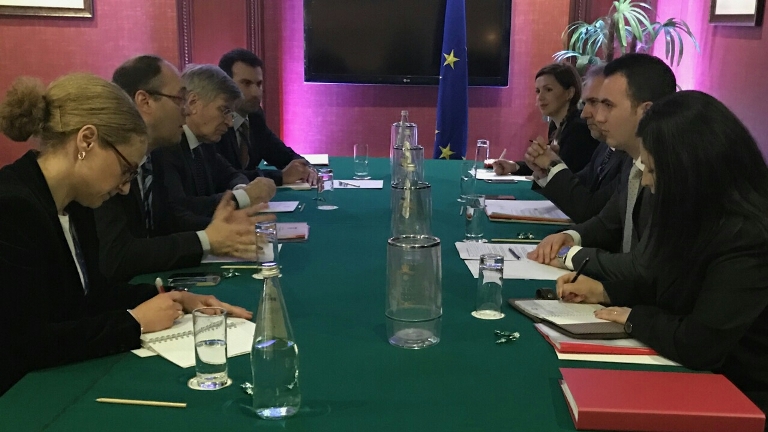 During the meetings Ademi reflected on the political situation in the country after the early parliamentary elections, and noted that there are ongoing negotiations on forming a new government.

"The EU membership remains a key strategic priority of the country which means the new government will be obliged to fully implement the Political agreement and commit to the implementation of reforms in the areas covered by the Urgent Reform Priorities, particularly in the areas of rule of law, judiciary and fight against corruption, interception of communications, public administration reform and media", said Ademi.

Also, we need to work on complete implementation of the Ohrid Framework Agreement as a basis for further improvement of the inter-ethnic relations in the country and further promotion of the good neighbourly relations and resolving open bilateral issues.

At the meeting with Minister Stier the continuous and consistent Croatian support to Macedonia was highlighted and the good cooperation between the two countries, especially in the field of European integration was emphasised. The large number of implemented joint activities to exchange experiences is especially important for our administration in terms of coordination of the integration process and harmonisation of national legislation with the EU acquis.

Topics of mutual interest were initiated at the meeting. At the meeting with the Deputy Minister Maasikas it was noted that the establishment of closer cooperation is particularly important, as it is to provide greater support in the EU bodies for initiation of the accession negotiations, having in mind the Estonian presidency in the second half of 2017.

During the meetings, the interlocutors agreed that beside the challenges EU is facing, the enlargement policy must remain high on the EU agenda, and Ademi stressed that it is of great importance to continue the support for Macedonia's accession by both countries, as well as by the other countries from the region.