News
Conference on topic "Impact of global security challenges on Europe and Western Balkans and ways to cope" in cooperation with the Kingdom of Norway
16:10, Friday, October 14, 2016 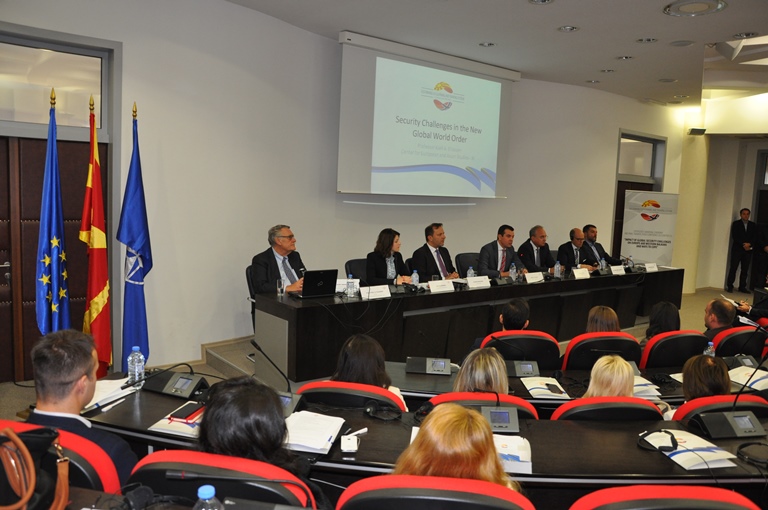 The Secretariat for European Affairs today hosted a conference on topic "Impact of global security challenges on Europe and Western Balkans and ways to cope," which was implemented within the project "Sustainable EU training system" financed by the Kingdom of Norway.

The conference was opened by the State Secretary for European Affairs Ana Blazheska and the Minister of Foreign Affairs Nikola Poposki, the Minister of Defense Zoran Jolevski, the Minister of Interior Oliver Spasovski and the Norwegian Ambassador Arne Sanes Bjernstad had opening remarks.  The speakers gave a brief overview of the security challenges Macedonia is facing, in terms of the sector for which their line ministry is responsible, with special emphasis on migrant crisis, although the country deals with it quite good, is still a potential security challenge for Western Balkans and Europe.

The importance of Euro-Atlantic integration of Macedonia was also emphasised, which is crucial for the security of the region. Professor Shell Elias, director of the Centre for European and Asian Studies in Oslo, Professor Fabrizio Lucio, President of ATA and Secretary General of the Atlantic Council of Italy, Odd Berner Malme, former Deputy Commissioner of police of Norway and Kurt Engeln the Permanent representation of Belgium to the NATO Military committee, also spoke at the conference in terms of security challenges in Europe and the Western Balkans.

The cooperation within the Norwegian bilateral assistance to Macedonia continues in the coming period and will be strengthened with projects in the field of security.