News
Besimi in the tenth meeting of the Stabilization and Association council between the Republic of Macedonia and the EU
16:32, Tuesday, July 23, 2013 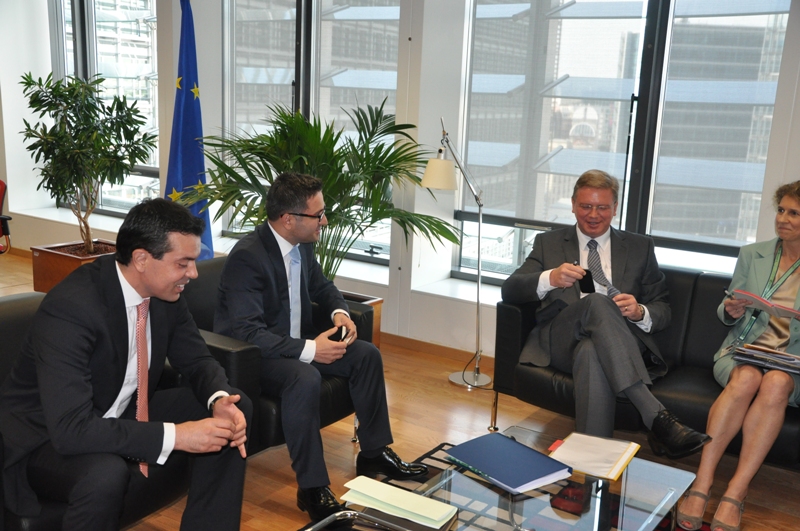 The Stabilisation and Association Council between the Republic of Macedonia and the EU (SA Council) held its tenth meeting on 23 July 2013. In the meeting participated the Deputy Prime Minister for European Affairs of the Republic of Macedonia, Mr. Fatmir Besimi and the Minister of Foreign Affairs Mr. Nikola Poposki, The EU delegation was led by Mr. Linas Antanas Linkevicius, Minister of Foreign Affairs of the Republic of Lithuania, on behalf of High Representative Catherine Ashton. Commissioner Štefan Füle also took part in the meeting.

The SA Council recalled that the Stabilisation and Association Agreement (SAA) remains at the core of the relationship between the EU and the Republic of Macedonia until the country's accession to the EU. The agreement provides the contractual framework within which the EU and the country co-operate and take stock of developments in their relationship.

The SA Council took note of the country’s primary objective and strong commitment to open accession negotiations, taking into account the Commission’s recommendations to that effect. The SA Council also noted the Commission’s report of 16 April 2013, as requested by the December 2012 General Affairs Council, which assessed that implementation of EU-related reforms has continued, that relations with neighbours remained good and steps have been taken in bilateral relations with Bulgaria and Greece, as well as on the name issue.

The SA Council reviewed the key developments over the previous period relating to the fulfilment of the political criteria, as well as the state of play concerning the economic criteria, financial cooperation and the implementation of the Stabilisation and Association Agreement. It welcomed the progress in the fulfilment of the commitments under the High Level Accession Dialogue, highlighting the importance of continued efforts and a strong emphasis on implementation. It noted the results of the Stabilisation and Association Committee held on 13 June.

Concerning the political criteria, the SA Council stressed the importance of constructive dialogue across the political spectrum. It was informed of the state of play of implementation of the 1 March agreement which is intended to address the events in the Parliament of 24 December. In this regard, the SA Council stressed the need for full implementation of all elements including the work of the Committee of Inquiry, the signature of the cross-party Memorandum of Understanding on Euro-Atlantic strategic priorities, electoral reforms and media dialogue.

The SA Council took note of the assessment of OSCE/ODIHR that the recent local elections were highly competitive and efficiently administered throughout the country. The EU stressed the importance of addressing in full the OSCE/ODIHR assessment and recommendations, including on balanced media coverage and distinction between state and party activities. In this regard, the SA Council welcomed the continuation of the work of the High Level Steering Committee for Electoral Reform and the government commitment to keep the electoral reform process transparent and inclusive for all stakeholders.

The SA Council reviewed the situation as regards freedom of expression in the media and took note of the progress made with the decriminalisation of defamation and relevant training of the judiciary. Resumption of the roundtable media dialogue with the Association of Journalists and other confidence building measures, a key commitment of the 1 March agreement, is essential. Concerning the new draft media law, the SA Council welcomed the broadening and extension of the consultation process and recalled that input from national stake-holders and advice from international organisations needs to be taken into account.

Concerning the judiciary, the SA Council welcomed the progress in improving the efficiency of the court system and emphasised the importance of the Judicial Academy in training future judges and prosecutors. It also noted that continuous efforts are needed to strengthen judicial independence in practice. The SA Council welcomed the progress in developing the anti-corruption track-record. It also took note of the enforcement of the systematic verification of potential conflicts of interest. The EU stressed the importance of continued efforts for effective and non-selective enforcement in the fight against corruption.

As regards public administration, the SA Council took note of the on-going efforts to set up a new legislative framework for civil and public service and general administrative procedures, following the principles of transparency, merit and equitable representation. The importance of further decentralisation and regional development was also noted.

The EU delegation recalled that regional co-operation and good neighbourly relations form an essential part of the process of accession to the EU.

The SA Council reviewed the progress made towards fulfilment of the economic criteria and the functioning of the market economy. It discussed the macroeconomic performance in the previous period and the latest economic developments, focusing on planned further reforms aiming to promote employment creation and to enhance the general business environment. The EU delegation stressed the importance of management and implementation capacities, as well as public finance management, multi-annual budgeting and strategic planning for all sectors.

The SA Council noted the progress made in identifying priority sectors for future EU assistance under the Instrument for Pre-Accession (IPA II) Country Strategy Paper 2014-2020. The EU welcomed the commitment to invest greater efforts into increasing the absorption of IPA funds, improving the national management and control systems and promoting skill development across institutions involved in IPA.

The SA Council welcomed the fact that the country continues to fulfil its commitments under the SAA. It welcomed the high level of trade integration and the finalized negotiations for the adaptation of the SAA to accommodate the accession of Croatia to the EU.

The SA Council recalled the Commission's proposal on the transition to the second stage of the SAA of October 2009, which remains under consideration in the Council.